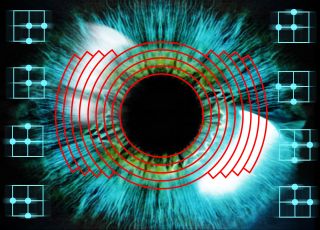 By using a larger sensor, the card is able to capture a much greater surface area and therefore a larger proportion of biometric data from a person’s fingerprint. Consequently, accuracy is inherently is improved, as the biometric template captured has more data to inform fingerprint authentication. In essence – the smaller the sensor, the more touches required by a user to obtain the same amount of information that would be gained from just a couple of touches of a larger sensor.

Not only does the size of sensor effect usability but also impacts the reliability. If the sensor has only captured a small portion of the overall fingerprint then the matching algorithm must first find the identical subsegment from within the previously stored user fingerprint template before it can attempt a match. It is like having a grid map of a city where the smaller the grid is the more difficult it is to find any one tiny square area of interest.

The challenge is that people are unlikely to place their finger on a sensor in exactly the same position every single time and thus there will be differences between the stored fingerprint template and the prints captured each time the sensor is used to verify a user. It is therefore important that the sensor is large enough to capture the fingerprint template at a variety of ergonomically friendly angles, including the tips of the user’s thumb. This pinching action, known as ‘tip touching’ is very natural when handling a payment card and must therefore be accounted for.

To further complicate things the biometric data obtained from our fingerprints is also extremely volatile and anything from varying pressure when touching the sensor, to scarred tissue on the fingerprint, can affect the fingerprint authentication process. Inconsistencies in our fingerprints, such as these, can cause ‘false negative’ responses. This is when a valid biometric sample is provided, but the system falsely rejects it. A larger capture area helps to mitigate these issues since there will be more usable information available for matching after eliminating the poor quality regions of the print.

A high number of false rejects simply will not suffice when it comes to day-to-day consumer card usage. Failed matches when trying to authenticate a payment in store would not just prove inconvenient for consumers but could also cause significant delays for the retailer taking the payment. In an age where consumers have become accustomed to seamless payment processes – multiple failed attempts to match a fingerprint are not an option and could hinder the mass adoption of biometric fingerprint payment cards.

A successful match, every single time

In order for a first-time match to be possible, a high-quality biometric fingerprint template must be created in the initial enrolment process – and to achieve this a larger sensor is critical. Larger sensors require less touches to enrol the fingerprint – the smaller the sensor the more times an enrolee needs to touch the sensor in order to capture an image of the whole surface of the finger. Smaller area sensors are also more prone to creating templates that have holes in them caused by non-contiguous captures.

Some manufacturers are getting around this problem by partially enrolling the fingerprint, by adding a fragment of the fingerprint and then adding to data to the template, once the card is in use. According to a new study from New York University Tandon School of Engineering, ‘partial’ fingerprints are less likely to be unique than full prints, making smaller fingerprint-based security systems less secure and more vulnerable than previously thought.

This method of enrolment, known as dynamic enrol, is leaving a huge security hole in the use of fingerprint biometrics and putting users at risk as a result. If a template can be changed, then over time the fingerprint biometric data originally enrolled onto the card can be gradually replaced. These ‘climbing attacks’ mean that potential fraudsters could use a card that has only been partially enrolled and add their own biometric fingerprint data to it – therefore gaining access to your bank account.

For the payments industry, where security is paramount, a smaller sensor could effectively be creating more security threats rather than combatting them. If consumers and financial institutions are to fully embrace the biometric fingerprint payment cards as a means of authenticating payments, then necessary measures to ensure optimal security must be taken.

Size will be a key to adoption

Despite the obvious benefits of a larger sensor, many sensor manufacturers continue to follow the historical precedence of the smaller and smaller sensors used in the mobile industry, even though the use case in cards vs. mobile is very different.  On a mobile phone the sensor must work within a small portion the display or small opening in the case and therefore the manufacturer has very little surface area to work with. A payment card however, has a large area of unused area to facilitate a bigger fingerprint biometric sensor.