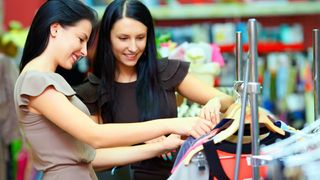 Back in 1995, while I was at my first technology job in Silicon Valley, I read a book by Nicholas Negroponte, called ‘Being Digital’ that changed my life. Negroponte, the founder and Chairman Emeritus of MIT’s Media Lab pointed out (prophetically) that most people would read his book as bits, not atoms, using an e-reader. He was right, although he couldn’t have foreseen the changes brought about by his fellow pioneers.

Now, in today’s era of always-on digital commerce, whether as readers or retail customers, we expect to shop anytime, anywhere, and using whatever device we choose to, we expect to discover new products that have been selected especially for us. As sophisticated digital media consumers, we want to quickly search among hundreds of thousands of songs, TV shows, and movies, then stream and interact with that content on our gaming consoles, smart TVs, laptops or smartphones. As digital-and-data-empowered travellers, we want up-to-the-second availability and pricing information based on our current location so we can secure the best deals and rapidly build a tailored itinerary with flights, a hotel, a rental car, and even reservations for restaurants and excursions. Even as patients, we want ways to streamline healthcare and receive tailored, dynamic treatment recommendations by sharing vital health information with doctors in real time via wearable devices.

These demands are products of IT’s consumer revolution, where innovations aimed at a consumer audience have impacted patterns of demand for enterprise technology. As this article will explain, the consumerisation of IT is forcing organisations of all types to question how prepared their existing technologies are to support modern customer demands.

Yet looking back to 1995, consumer-centric IT innovations such as those outlined above were a pipe-dream. IT was almost entirely the preserve of the enterprise environment, while the Internet was barely understood, and dismissed as a passing fad. Software geeks across Silicon Valley had grown up learning programming in FORTRAN or COBOL, using punch cards on an IBM System/360. It seems unimaginable now, but simple pieces of card, with either a presence or absence of holes in predefined positions, represented data or code for data processing applications. No one, other than the batch computer operator who manually set up the mainframe computer to run each program, actually interacted or engaged with these machines and the code.

As for software, we had already seen certain applications appear in the previous two decades. German software giant SAP had issued a number of financial applications in the 1970s and 1980s, which were soon adopted across various room-sized IBM mainframes. All of which existed firmly in a world where almost all computing was enterprise computing. After all, enterprises were the only ones that could afford an IBM Mainframe or ERP (Enterprise Resource Planning) applications like SAP, or MRP (Manufacturing Resource Planning) applications like Baan - and any enterprise that had leased a computer from IBM wanted to use it efficiently (which meant all the time) to help defray the high costs.  On the enterprise software side, early financial system innovations from the likes of SAP soon evolved into HR systems, such as payroll, accounts payable, accounts receivable, before moving onto supply chain, order processing and finally Customer Relationship Management (CRM).

Yet more pertinently, in the late 1960s and early 1970s, we saw the emergence of minicomputers from companies like HP, Digital Equipment Corporation and Data General, to address the needs of mid-sized organisations. These served as a bridge between the IBM mainframes and the PCs that would soon be used in homes and businesses alike. Compared to the ‘big iron’ mainframes, minicomputers were comparatively inexpensive, smaller and faster to build. Designed with proprietary hardware and software to handle substantial computing tasks, minicomputers were applied to manufacturing processes and applications like company email. Software vendors like Baan, J.D. Edwards and Oracle were happy to serve up ERP solutions to medium-sized companies that purchased these specialised mid-range operating systems and machines.

All of this laid the foundations for the personal computing revolution. Led by visionaries like Bill Gates, Steve Jobs, Paul Allen and Steve Wozniak, ‘microcomputers’ like the Apple II proved themselves worthy successors to the minicomputers, featuring integrated keyboards, a built-in BASIC programming language, expandable memory and even monitors capable of handling colour graphics. Commodore’s PET computer and Radio Shack’s Tandy TRS-80 were introduced in 1977, along with the Apple II. But what really put the Apple II, the Commodore and TRS-80 (pejoratively called ‘Trash-80’ by many) on the map wasn’t just their novelty or low cost – it was that the computer's software now gave both enterprise and home users the opportunity to compute numbers on ‘spreadsheets’, write text documents on a ‘word processor’ and play games like Space Invaders, Frogger, Pac-Man and Donkey Kong. An interesting side-note is that many games’ source code was published in books (such as David Ahl’s BASIC Computer Games), magazines and newsletters, which allowed users to type in the code themselves. Early game designers would find the computer code for their games—which they had never thought to copyright—published in books and magazines, with their names removed from the listings. Early home computers from Apple, Commodore, Tandy and others had many games that people typed in. These software applications on the microcomputer were what we would call the earliest consumer ‘Systems of Engagement’.

As we moved into the 1990’s, the lines between enterprise computing and personal computing began to blur even further. With the advent of the client-server revolution, PC’s were hooked up into the back-office ERP systems over LANs. Teams within the enterprise were finally able to use their PCs to manage, create and manipulate systems of record like SAP, Baan or J.D. Edwards. Many enterprises even started building custom applications on the newly popular relational databases like Oracle, Informix and Sybase. These early client-server applications marked the first enterprise ‘Systems of Engagement’.

The two may have seemed distinct at the time. Yet ultimately, both Systems of Engagement were based on the idea of customisation – Apple and its counterparts gave users the freedom to customise the video games they played, while Oracle and its counterparts empowered users to customise systems of record. Both played an important role in setting the scene for the eventual consumer revolution in IT, yet even visionaries like Negroponte couldn’t have predicted just how much the two aspects would influence each other.

To be continued in part two.

it
Consumer
revolution
shopping
Get Weekly News and Analysis