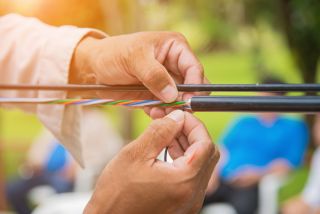 In the middle of the Summer BT made the bold and ambitious announcement to deliver the government’s Universal Service Obligation (USO) of 10Mbps to all UK premises by 2020. This is an important step in ensuring a minimum viable solution for UK businesses and consumers, and BT should be applauded for taking the initiative. But I also want to keep this announcement, and the USO, in perspective. There are three issues with the USO;

While everyone knows that 10Mbps is not very ambitious (even the House of Lords lobbied for the USO to be set at 30Mbps), the speed was set at 10Mbps to ensure someone (BT) actually took it on. The government certainly didn’t want the job of delivering universal broadband, and BT was the only player capable of delivering it. For the first time, we have a nationwide commitment to put everyone on a level playing field. This is a great achievement which will unlock economic opportunities for those regions that have been left behind for too long. For them, 10Mbps is a significant speed boost indeed and BT’s commitment to deliver it should be commended.

Some say BT should have committed to more than 10Mbps. Personally, I’m not sure how or why they should have. BT have committed to 10Mbps because this is precisely what the USO asked of them. 10Mbps will already cost BT £600m and I doubt its lawyers were screaming for it to set a more ambitious target for itself, considering the USO will be a legally binding contract.

The committed speed of 10Mbps could be easily criticised against the backdrop of headlines routinely announcing 1Gbps fibre connections in city centre locations, but the speed is not an issue. Let’s not forget that the headline speed is the minimum speed that will be available to every person in the country. By its own admission, BT already expects 95 per cent of homes and businesses to have access to speeds of 24Mbps or faster by the end of 2017. I am confident BT can, and will, go further than 10Mbps. But the government must back its proposal to allow it to recoup the costs by selling the service on to other providers.

2. BT had no choice, it had to deliver the USO

By floating the idea of the USO, the government has effectively regulated the telecoms industry without passing the legislation to do so. The USO was always written with BT in mind. The government practically admitted it when it stated that Openreach was the internet provider best placed to deliver the government's plan for the USO. The USO is the regulatory lever that the government never had to pull. It was enough to threaten the industry with it. Coming shortly off the back of Openreach’s split from BT in March (again, another entirely ‘voluntary’ exercise on BT’s part), BT knew it needed to be proactive to avoid yet more intervention in its business.

It is also worth bearing in mind that no decision has been made on BT’s offer. While BT has offered to deliver the USO in an effort to stop the government imposing even more regulation on the industry, the government still needs to decide whether to accept BT’s offer. I for one hope it does so the government and industry can focus on fibre.

3. It fails to address fibre investment

We finally get to the real issue. Fibre investment, and who pays for it, is the elephant in the room in all of this. Fibre-to-the-cabinet will only take us so far. The government needs to recognise that the only viable, long-term solution for the UK’s competitiveness is to double down on true fibre-to-the-premise (FTTP) investment. Only FTTP will deliver the next-generation, scalable, future-proof connectivity that we need.

So far, it has fallen to the private sector to deliver the UK’s full-fibre infrastructure. Innovators like CityFibre should be commended for delivering FTTP infrastructure to our towns and cities, but relying on the private sector alone will never deliver fibre to every household and business in the country. Installing fibre networks is very expensive and carries significant risk, so the private sector can only make the investment when the business case stacks up. If universal, high-speed internet access is indeed the government’s aim – as the USO would suggest it is – then it needs to make the commitment to universal fibre investment.

We need a national fibre investment policy if we are to close the ever-expanding Digital Divide in this country. The gap in connectivity between those in town centres and those just two miles down the road is not shrinking – it’s wider than it’s ever been, and the USO’s 10Mbps commitment makes no difference at all when those in town centres are accelerating up to and beyond 1Gbps.

If the government is serious about delivering a world-class internet economy for all, especially post-Brexit, then it should extend the remit of the USO to include universal fibre coverage, and provide the necessary funds or regulatory environment to deliver it. The government must decide whether to commit the necessary funds to deliver an ambitious, national fibre infrastructure programme, or to allow the industry to make a return on the significant risk and investment it is already making so it can accelerate its efforts. While I am sure both routes will eventually deliver the fibre infrastructure Britain needs, the former will deliver it much more quickly than the latter. I for one would rather not wait, so I urge the government to put its money where its mouth is and initiate a programme which builds on, and works with, those in the private sector who have already delivered true fibre to millions of homes and businesses across the country. With the right levels of commitment and investment, we could very quickly secure the UK’s future as the digital leader in Europe.