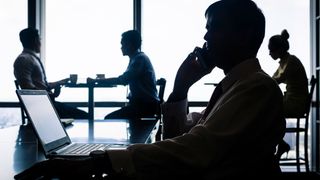 Back in 2005, Gartner analysts made the bold prediction that consumerisation would be “the most significant trend affecting IT in the next 10 years.” Fast forward to today and they have every right to feel just a little bit smug about this – you won’t come across many that would disagree.

Consumerisation of IT relates to people taking the technology they use at home (everything from their smartphones and iPads, through to web-based email and social media) into the workplace only for it to be eventually embraced by the organisation.

Business apps are rarely as sleek, intuitive, user-friendly as consumable apps are, and when organisations use slow, clunky business software it can often lead to a digital divide in the experiences people have in their personal lives and at work. This, in turn, can impact productivity and employee satisfaction.

As a result, IT teams are in an unenviable position. First, they need to have full visibility of all the software and applications that are connecting to their network to avoid serious security issues. Then they must work to remove the divide between enterprise applications and non-enterprise authorised applications used by employees within the company. It can be an arduous task, but if done effectively, the consumerised IT experience can play a key role in establishing a broader digital focus across the business and have a significant impact on employee gratification.

If businesses follow these top tips, neither speed nor security need to be sacrificed in the era of IT consumerisation.

Keep on top of Shadow IT

Gartner is very much of the opinion that Shadow IT is here to stay and that as digital solutions continue to infiltrate organisations, the IT department will actually be making fewer technology decisions than today. Instead, individual business units will take ownership over selecting technology for their teams.

There has been a paradigm shift in enterprise tech buying patterns, and today, any tech savvy business manager armed with a business credit card and access to the internet can buy software thanks to vendors adopting the SaaS model.  The consumerisation of technology has only made things easier for those employees who possess a business credit card – and today it is not only software that is gradually going beyond the scope of Shadow IT, but also hardware and gadgets.

While the threats of Shadow IT include data security or bug-infested software, it’s not all bad news for IT departments. If embraced correctly, the benefits that Shadow IT can provide are huge, including making businesses more competitive and employees more productive.

It’s up to the IT team to understand how and where Shadow IT is being used, and to allow employees to continue using these applications, while ensuring the security of the company network isn’t compromised.

Open communication is pivotal to this. It is imperative for the IT department to reach out actively to each business unit and educate them about they can help them achieve their goals and outcomes. The IT team needs to be fully aware of the latest tech investment even if they are not directly involved in the purchase.

Give employees a say

We recently conducted research into how organisations make decisions on the software they use and the resulting consequences. What the research uncovered was that many companies have an overwhelmingly top-down approach to software selection – which, as a result, is costing businesses hundreds of millions of lost hours in productivity, and billions of dollars annually.

This might come as a surprise to IT departments, but of those surveyed, over half admitted they’d rather have a say in the software they use at work than have extra days of paid holiday. Further to this, almost a quarter (24 per cent) said that using software they hate makes them want to quit their jobs. This grows for millennials with 30 per cent saying that being handcuffed to bad software makes them want to pack up and leave.

With software having such an impact on productivity, employee happiness and company success, it is vital that businesses secure buy-in from stakeholders across the organisation before a new piece of technology is implemented. Yet, our research indicated that employees have a greater say in the office snack selection than the software they use day in, day out!

Giving employees a say in software decisions means they will be invested in the process and can adapt quicker to a new system that they’re comfortable with. This will help ensure that the software that is invested in is customer-centric – ultimately helping businesses navigate the era of IT consumerisation.

Organisations have a responsibility — to their employees, their customers and themselves — to bring the voice of their workers into the technology buying process. The happiness of their employees and customers depends on it, as does the health of their business.

IT upgrades and changes are often seen as one of the most stressful changes to affect jobs and effective communication to guide employees through the process is essential. If companies and IT departments communicate effectively, the adoption of new software can be seamless, allowing for security and speed. Upskilling employees and alerting them to the potential pitfalls of any non-enterprise authorised IT purchases will enable the business to transition smoothly and put them at greater ease about other technologies being used in the workplace.

Shadow IT is inevitable within the modern workforce. To counter its effects, increase productivity and employee satisfaction, IT teams must ensure they are firstly, educating the wider business about the tech purchasing decisions they’re making, secondly, investing in consumer-centric software and finally, keeping an open line of communication at all times.