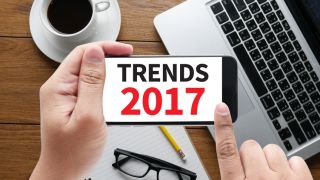 January is a great time to take stock of what’s going on in the business and technology worlds, a great time for planning, and a really great time for articles full of futuristic prognostications. I work as a technology strategist at ThoughtWorks and our global workforce of 4,000 technologists give us a good view into what’s likely to happen in 2017. Here are the most important trends.

Every company has realised they need to make the shift to “digital” and to embrace digital transformation in their business. In the same way that today it seems strange to talk about a “mobile website” or “mobile app”—of course your brand must be accessible on a cell phone!—the term “digital” will soon become superfluous. Anyone whose job title includes the word is likely to drop it. “Digital” will move from being the most overused term of 2016 to the most anachronistic of 2017. Successful organisations will have adapted to life in a new, digital-by-default world and will be reaping the associated benefits of adaptability, efficiency and scale. A great example is the UK Government’s Digital by Default strategy—by using agile and lean techniques and smaller suppliers (in contrast to the usual behemoth IT partners) GDS is able to much more rapidly deploy and iterate the services they provide to citizens.

Machines will empower people, not replace them

It’s clear that machine intelligence will have a massive impact in 2017. In some areas—autonomous vehicles being the most obvious—machines will certainly displace humans, but a jobless future for today’s workers is unlikely. We envision a future where people and machines work together, each playing to their strengths, to achieve greater outcomes. We call this “intelligent empowerment”: an organisation doesn’t replace its workers, it teams them up with specialised machine intelligence. Algorithms will take on tasks that people formerly performed and weren’t usually very good at or didn’t enjoy doing. As an example, ThoughtWorks is helping a client classify millions of legal documents, identifying which are contracts as well as the legal clauses that have changed between revisions of the contract. For human lawyers this is painstaking, slow work, but can be rapidly accelerated through machine learning.

People will use these tools to accomplish tasks quicker and more accurately, freeing them time to focus on areas requiring human ingenuity and experience. Additionally, we will solve problems in new ways and allow people to do things they could never do before, opening up new opportunities.

2016 was the year that Virtual Reality (VR) became mainstream and we’ll see the same coming-of-age for Augmented Reality (AR) in 2017. We believe AR is the more interesting technology, especially for business applications, and that its use will skyrocket in the second half of the year. We’ve also already seen voice interfaces such as Amazon’s Alexa become mainstream, and huge investments in smart digital assistants such as Siri and Viv. All these point to us moving from simple keyboard-and-screen or finger-on-glass interactions to true multi-modal interactions, with users moving fluidly between interaction style based on their context or preferences. Digital assistants, in particular, may lead to complex business outcomes. If I prefer to use Siri or Viv or Alexa to book plane tickets and a hotel, do United and Marriott need an app any more? If Apple, Google or Amazon disintermediate today’s app builders, many companies must shift their strategy to ensure they can continue to project their brand into consumers’ digital space.

Platform building will become the norm, not something “other” companies do

The word “platform” is heavily overloaded and might refer to cloud, IoT, automotive, big data or machine learning platforms, but despite the confusion (which I won’t try to solve here) 2016 was the year that “platform building” really became mainstream. In 2017 laggards will slowly catch on to the fact that platform building—deliberately and systematically building technical systems and business capabilities that are the foundation for something bigger—is critical for both scale and agility. ThoughtWorks has seen our clients’ teams become as much as 3x more productive simply by standardising on a deployment platform such as Pivotal Cloud Foundry, taking the guesswork out of scaling and operating IT systems and allowing developers to focus on delivering business value.

Netflix has achieved its growth in part by having a fantastic technical architecture coupled with a great UI that keeps people engaged and watching TV. What’s less well known is that Netflix A/B tests every single change they intend to roll out, experimenting on real customers to see which changes work best. In order to support this massive amount of A/B testing, Netflix built a platform for experimentation. Many organisations will soon realise that today’s public and private clouds are merely technical delivery platforms and must be augmented with business-focused capability platforms, exactly like those built by industry leaders.

IT leaders must speak “business” now, more than ever

The trends I’ve written about here—post-digital businesses, intelligent empowerment, evolving interactions, and platforms—are just a sample of this year’s most significant changes. As technology leaders we must drive our organisations to experiment with these advances, feeding experiences and insights into our business and technology strategy. As business and technology become ever more intertwined, this insight becomes ever more critical, but it’s important for us not to be the “lone geek” in the room. We must talk about advanced technologies using business-relevant language, and we’ll play a significant part in driving it into our organisation’s strategy.