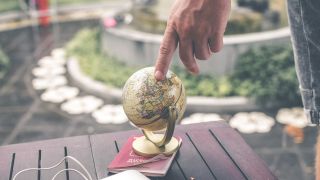 Establishing a new presence in an overseas market is a common occurrence for global multinationals. Yet every foray into a foreign market presents a unique set of risks, especially when it comes to security-related challenges such as ensuring the safety of executives and employees as they take steps to establish a base of operations. When operating in a new and unfamiliar territory, businesses need a clear understanding of the security challenges they might face in order to help mitigate risk and enable operations.

For most companies, developing that understanding rests with the corporate security department.

In a bygone era, before the internet and social media became part of life, most Chief Security Officers (CSOs) relied on cable news outlets to keep track of breaking events with the potential to impact the company.

Today, with hundreds of millions of people within arm's reach of their cell phone and active on social media, instead of taking hours, sometimes days for an event to become news, it often takes seconds for newsworthy events to appear on Twitter. In fact, in terms of the breadth and depth of events covered, there's a significant difference between what cable news stations choose to report, and the range of events available for consumption on social media.

A measured, fact-based approach to security

Given the steady stream of social media activity, when harnessed correctly with the appropriate tools and technology, the CSO can develop an unparalleled appreciation of the threat landscape a country presents, long before the company enters the new market.

Instead, social media alerts allow the CSO to use such statistics as a starting point for a deeper analysis, with the goal being to develop a custom-built threat assessment of the entire spectrum of risk associated with a company’s intended area of operations. Through such analysis, for example, the CSO may determine most of a country’s homicides took place in a certain region of the country, far removed from the company’s proposed location, and typically involving local conflict, not foreign executives working for multinationals.

And when it comes time to brief the board or C-Suite regarding the potential risks accompanying a proposed expansion effort, the analysis of historical and real-time social media alerts provides the CSO with the third-party data they need to educate senior executives and justify the investment in risk mitigation.

For example, if alerts uncover frequent kidnappings of executives traveling in eye-catching SUVs on certain roads, the CSO may recommend avoiding those thoroughfares, replacing the company's SUVs with lower profile vehicles, and requiring executive protection agents to accompany traveling executives throughout their journey.

Regardless of whether the alerts relate to risks involving the company's employees and executives, business assets, or intellectual property, real-time event discovery helps the CSO improve his or her ability to act faster and protect the company against a broad range of threats.

And that ability to move quickly is often critical as companies typically pursue investments in foreign markets on strict timetables. In short, there's no time for the CSO to “catch up”. Instead, at the risk of being viewed as out of step with the needs of the organisation, the CSO must keep pace with the expansion effort's timetable.

Everyone uses social media. So must the CSO

Nonetheless, if the CSO does not use social media to gather insights to inform an international expansion effort, there's nothing to stop other executives from doing so. Therefore, instead of being the first to gather, interpret, and present relevant information on the country of interest, when they leave social media analysis to others, the CSO spends his or her time addressing concerns raised by everyone else.

While isolated events such as a terrorist attack require special attention, one of the primary reasons to embrace social media alerts is to discern whether there's a pattern of activity with the ability to impact how the company operates in a foreign market. So instead of relying on sensationalised news reporting, or anecdotal information gathered by executives outside of the security department, access to social media alerts provides the CSO with context to events and multiple, real-time points of view to consider.

In addition to assessing the prevalence of headline-grabbing events, social media alerts allow the CSO to gain an appreciation of the run-of-the-mill issues that come with operating in certain markets, and which appear in traditional news media on a haphazard basis.

For example, how well-maintained is the country's infrastructure? How long does it take to reach the business district from the airport? How many U.S. companies operate in the market, and what type of problems do they experience? When did the country last experience a major weather event, and how long did it take for the government to act?

Given the considerable costs to enter and exit overseas markets, CSOs must use every tool available to them to develop a threat assessment package to help guide the company's decision-making process and mitigate the risk the new market presents.

And whilst a thorough appreciation of the threat landscape helps companies mitigate risk, it may also create a competitive advantage over competitors that expand to the same market, yet lack a detailed understanding of local security conditions, which can be derived from social media alerts.

Therefore, in addition to leveraging information provided by government departments and officials, there's certainly a role for social media, as well. Whilst extracting actionable alerts from social media requires a nominal investment, entering a market without an understanding of the threats that await often comes with a far bigger price tag.