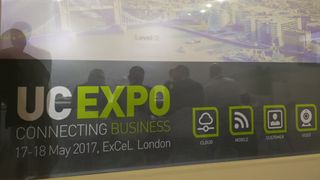 Collaboration and business communication continue to be hot topics as we saw last week at UC Expo, and businesses are increasingly looking at ways to reduce complexity in their communications while also improving efficiencies, productivity, customer engagement and loyalty.

So, with these in mind, what were the most important trends that came out of UC Expo and that are expected to frame the communications and collaboration discussion, and technology development, over the coming months and years? Do recent major new platform and product launches from enterprise vendors match up with how businesses want to communicate with colleagues, customers and external collaborators?

The concept of unified comms was a valiant one; getting everyone communicating via phone, text, video or another channel seamlessly no matter the platform. But the reality is that unified communication, as the majority of vendors would have it, will never actually happen. Over the last year, several high-profile tech companies have launched new, innovative collaboration tools promising to revolutionise and simplify the way that workers communicate and customers engage with brands. Many of these were on show at UC Expo and will do exciting things for businesses in limited instances. But, with hundreds if not thousands of comms tools (that are largely closed, proprietary systems), and vendors vying for business, the industry is creating fragmentation and walled gardens - far from the promise of unified utopia.

Business comms technology has been learning lessons from mainstream consumer apps – like Facebook Messenger, WhatsApp - which provide an efficient, rich, varied, partly asynchronous way to communicate, and that is now widely accepted as the most efficient way to do business. As a result, a new approach is emerging: the development of real time, open, web-based applications that embed comms tools, making communication task-based and informed by relevant transactional and trend based data. This is called contextual communications. A simple example is the act of clicking to call someone directly from an application or webpage that a user is already on, rather than the distracting and time consuming process of realising a call is needed, then thinking about the best way to make contact based on several different factors, finding contact details and information about recent transactions, and choosing a standalone device or program which requires manual input and finally, initiating the conversation.

Contextual communication simplifies user experiences based on the context of what someone is doing. In its simplest form, it embeds a call or chat function within a web page to allow efficient and frictionless comms in context - removing the barriers and silos found in almost every UC product today. From what we’ve seen in the market this year, comms must eventually become truly unified, where apps and tools integrate and interoperate, and not be balkanised by siloed services.

Security and encryption of communications

Security remains a top concern for businesses and with high profile cases in the news every week, protecting from data theft, fraud and network breaches is paramount. As GDPR comes into force in May 2018, this will become even more important as the definition of what constitutes personal data is extended. The aforementioned contextual comms could play an interesting role in how businesses deal with these challenges because it makes it easier to define how and when people communicate, as well as helping to define the specific data that will be shared. This controlled approach is less likely to leak than traditional ‘free’ communication.

Outside of contextual comms, UC&C platforms still, of course, need to be protected. With on-prem solutions, the responsibility for maintaining secure borders is clear cut but there seems to be a dichotomy when it comes to security for hosted platforms, where there is the risk that each part of the chain could effectively ‘pass the buck’ of responsibility, from end-user up to reseller, up to service provider. So, who ultimately has the responsibility ? It’s clearly a better scenario to ensure the hosted platform has robust and resilient security and encryption built in, without passing on any complexity on to the reseller or end user. This is not currently the case and developers of hosted solutions can do more to help protect against fraud in terms of prevention, detection and compensation. This would include features like encryption of conversations - voice, text and video, not just voice - at the platform level.

There are a handful of killer questions to ask hosted providers to ensure systems are reliable, redundant, and secure, as well as cost effective, feature-rich and scalable. I would hope to see more solutions offering secure HTTPS handset provisioning, and quarantine processes for unknown devices to stop leaking of address books and other internal information, as well as taking steps to prevent SIP usernames and passwords from being used to make fraudulent calls - all viable attack vectors. Vendors, and their resellers, need to start taking this seriously and not just paying lip service to it.

Perhaps surprisingly, cloud is still commanding a lot of air time even though public clouds are now natural homes of mission critical apps, driven by scalability, flexibility and price. Hosted telephony services are still in a period of solid growth and according to Cavell Group at its recent European VoIP Summit; it’s seen an increase of 24% in the last 12 months in the UK, driven by changing network infrastructure and the overall decline and commoditisation of telephony and email. Research And Markets has also cited a significant growth in its recent report “European Hosted IP Telephony and UCaaS Market, Forecast to 2023”, claiming “the European hosted Internet Protocol (IP) telephony and unified communications as a service (UCaaS) market continues on a strong growth trajectory that is creating value for businesses and growth opportunities for service providers.”

Amidst all this growth we’re seeing a lot of similar services focusing on price rather than user experience - a rush to claim valuable subscribers without a thought about delivering real value to those businesses. As the majority of hosted telephony service providers continue this race to the bottom, it’ll mostly be left to the third party software developers to be the fastest innovators in the space and spearhead new communications applications, tools and services. This is already happening - there is so much innovation in the sector now that service providers will find it hard to effectively compete in the space. Rather, it’s easier for them to open their platform for those third parties to develop integration and user apps and layer them onto the core infrastructure to deliver the most attractive possible service to their end users. They’re a route to market for the third parties, and embracing that is what is going to drive real innovation in the comms space and deliver real profit to service providers’ shareholders when the subscriber land grab is over.

Innovation: AI and beyond

It was just a few short years ago that 1-to-1 video conversations were struggling to gain traction in business environments, but the accessibility and acceptance of video within the consumer realm effected a change. The same thing is happening for AI and machine learning, with Siri, Alexa et al. in popular use, but where consumers are largely using it to interact with machines verbally, the potential for business is much greater - particularly where there are high volumes of customer interactions.

Robots can easily deal with the most common queries, complaints, requests or questions and make suggestions according to what’s in their database, freeing up agents to tackle more complex enquiries for a more productive and efficient contact centre. As time goes by, robots can learn from their interactions to continually improve the service they provide. Beyond this comes cognitive interactions where robots understand accents, sentiment and context, giving the ability to handle communications in a more natural, human way. Far from the frustrating automated services we’re used to today, these technologies can understand different accents and tones, as well as ask questions and resolve queries quickly and accurately. It may seem like science fiction, but we’re already seeing the first examples of these techniques being developed to analyse customer interactions and improve processes, for example in the mystery shopping market. Again, it is another example of context in communications removing barriers and making communication more efficient and effective.

I believe the real-time enterprise of the future will be able to communicate with its employees and customers in context — at the right time, with the right people, in the right application. This is the future of enterprise communications. It will ultimately ‘hide’ communication as it becomes integral and inherent within applications; we won’t even think about communication as a distinct, stand-alone, friction-bearing operation. Rather, it’ll simply be something that happens as we move in and out of collaboration or communication. And for customer engagement this brings huge productivity and efficiency gains, a far better and more natural experience and ultimately improved customer retention and loyalty.