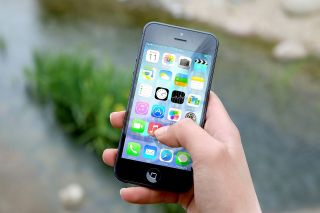 Currently, many people unlock their phones by pressing their thumbs onto fingerprint sensor panels or using their fingers to draw patterns on the screens. Those authentication methods are certainly high-tech, but, before long, you’ll likely be unlocking a phone that knows more about you than you’d ever imagine.

Check out some of the smartphone security methods being tested and what they might mean for future users.

Measurement tactics occur even when your phone’s in your pocket

Most smartphones have numerous sensors such as accelerometers and gyroscopes. Tech experts say those advanced models use information from location-based sensors to indicate what floor of a multi-story building you’re walking on or whether you’re inside or outdoors. What’s even more surprising? Those things can happen even when your phone’s tucked in your pocket.

There are already apps you can download that use the location of your phone to give insight about things near you, such as airport amenities. They can tell airport occupants how to find the nearest elevators or where to go to grab a coffee and donut before boarding.

The location-based technology can even inform a person how far it is from their car to the terminal, allowing them to make smart calculations to avoid rushing. Theoretically, the airport industry could come up with an app that helps authorised airport personnel know precisely where people are on the premises and then send airport workers there to meet them.

For example, if you become so flustered while going through a security checkpoint that you forget your carryon bag but remember to retrieve a purse that contains your smartphone, airport workers could verify your identity using their records. Next, they’d rely on your phone’s data to tell them precisely where you are. Someone could meet you with your bag, maybe even before you realise you’d forgotten it.

Of course, there are privacy concerns associated with this potential scenario. Provided airport users gave advance permission for certain people to access that kind of data associated with their phones — perhaps while buying airline tickets — the proposed outcome above could be a real possibility.

If someone steals your password, you’re suddenly faced with a very severe problem. That’s especially true if you go against conventional wisdom and use the same password for everything from your Spotify account to your online banking interface.

Many companies are aware of how common it is for people to have their passwords stolen. With that in mind, they’re increasingly depending on phone number verification methods to help individuals regain access to their accounts.

Once a person realises their account information has been compromised because the password was stolen, they can request assistance via a phone number verification. When that happens, an automated voice message comes to their smartphones and contains a PIN. People then enter the PIN at a designated website to proceed through other steps to complete the verification process, such as answering secret questions or picking new ones.

This method reduces the need for customer service representatives because it allows people who have lost their passwords to take matters into their own hands as long as they still have access to their phones. Since access to smartphones has gotten so much tighter, it’s more difficult for unauthorised people to break into the phones, even if they’re experienced hackers.

In contrast, if a person simply requests a password reset code be sent to an email account, the email is arguably easier for a hacker to break into. That’s simply because emails aren’t yet characterised by the myriad sensors already included on most phones.

Companies may track your phone-usage behaviours

For years, scientists have been studying how a person’s typing behaviour while using their smartphones could provide another way to verify identity. If someone using the phone was typing a text at a significantly lower speed than normal, it could indicate the smartphone has been snatched and the current user, potentially the thief, is having difficulty learning how to use the built-in keyboard.

Companies are starting to record even more ways people interact with their phones, such as their swiping speed, the pressure used for typical keystrokes, the angles devices are held at while in use and so on.

Some smartphones have embedded movement sensors that can tell when a person pulls their phone out of their pocket to answer it and dim the display panels once the phone reaches the user’s ear to save battery life.

Tech experts say these kinds of behaviour-based analytics may not just come in handy for verifying the phone’s genuine owner. It could help phone manufacturers come up with new and better designs.

If a smartphone company unveils a new type of touchpad keyboard and it becomes known people must press abnormally hard on it to make it function, they might only keep that technology for one generation of the device.

Touch ID is already seen as one of the leading authentication technologies for mobile devices. But before long, people may have to go through several identity checks before their phones will let them pay for stuff.

A version of the Samsung Galaxy S8, which will be available in the Australian market soon, employs fingerprint sensors, iris scans and even facial recognition to make sure a person making a payment via the device is really an authorised user.

This multi-step verification process might be used even more often than you’d initially expect. The most common benefit is that the technology would stop hackers from draining bank accounts with fraudulent purchases.

But, think of how it could also be advantageous if a frazzled parent gives a smartphone to an overly curious toddler to keep them quiet, and, in just a few seconds, the tot has swiped and tapped its way into an app store. If the phone was one that doesn’t depend on so many verification methods, it may be fairly easy for the youngster to unknowingly buy things, especially if the parents have automatic or one-click purchases turned on.

The Galaxy S8’s security features reportedly complement each other. For example, if a person is in a room that’s too dark for the facial recognition technology to work correctly, the phone might just rely on an iris scanner when a person wants to unlock their phone.

Although we’ve looked at future verification methods favourably, it’s necessary to be aware of possible downsides, too. For example, since the newest phones are so heavily tuned to recognise authorised users, it could be difficult for a phone’s rightful owner to sell the gadget.

Would-be buyers might not follow through with their purchases due to worrying the device would never recognise them correctly. Because these kinds of technologies are still emerging, many people are both interested and taken aback by them. They might just think it’s easier to buy a new phone rather than dealing with verification issues.

Consider, too, how certain behavioural patterns might change if a person gets in a debilitating car accident or has a stroke. Those events could make it so they must use their phones in different ways because their former habits are no longer feasible. Then, there’s a chance the smartphone may not work properly for them because their bodies are behaving differently.

You’ve just gotten a fascinating glimpse into what the future might look like for smartphone users. In a few years, you might even own a phone that knows you want to unlock it before you’ve even consciously thought about that because it can spot behavioural cues you unconsciously display just before reaching for your phone to use it.