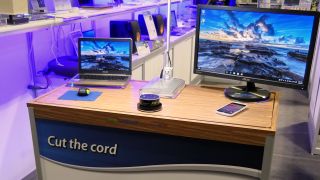 Since Nikola Tesla first experimented with wireless power during the early 1900s, there has been a quest to “cut the cord” – and go wireless. Today’s applications for wireless power undoubtedly extend far beyond Tesla’s wildest imagination, as we now have the ability to wirelessly charge cell phones, power tools, and even buses while at their scheduled stops, not to mention airborne drones while flying. However, despite strong consumer and business demand for wireless charging, power cords still reign. What explains the lag in our ability to power all of our electronic devices and appliances wirelessly?

To get answers, we sat down with Alex Lidow, CEO of Efficient Power Conversion (EPC), which has developed technology that is used by many companies that are bringing wirelessly-powered products to market.

Magnetic resonance appears to be the superior technology but the WPC has far greater market share. Which standard will become ubiquitous and which one will be relegated to “Betamax” status?

I think a better comparison would be the cassette tape vs the CD player.  Qi (cassette tapes) is a first-generation approach to wireless charging.  The Qi technique of using an inductor to transmit energy has been around for over 150 years and is quite simple.  The problem is that it does not offer spatial freedom (in other words, the device must be carefully aligned on the charging pad).  The first-generation Airfuel magnetic resonance wireless chargers, such as the one offered by Dell for its recently announced Latitude 7825 2-in-one laptop, offer more spatial freedom, higher power levels, and the ability to change multiple gadgets simultaneously.  This isn’t a standards war, it’s an evolution of a technology that will eventually replace power cords entirely.

Q: After a quiet 2016, the topic of wireless power is in the news again. This year, we already have the LG G6, the recent Latitude 7285, and rumors about the iPhone8 abound. However, despite strong consumer and business demand for wireless charging, power cords still reign. What’s holding us back from living in a world without power cords?

In short, convenience and cost.  Consumers do not want a solution like the Qi inductive chargers that require careful device-charger alignment and are slow to recharge their phones.  We are already used to plugging a cable into our phones, so the marginally added convenience of putting your phone on a target and waiting a long time for a recharge simply does not add enough value to make it a viable alternative.  Especially when you consider that the cost of the chargers is higher than the conventional micro USB or Apple cables that we have lying around everywhere today.

We need a solution that requires no thought, and one that is fast and efficient.  The only solution I see out there today with that potential is the Airfuel Alliance standard for magnetic resonance.  This standard allows a certain amount of location freedom, can charge many objects at the same time, and can provide enough power to charge phones, wearables, and laptops as quickly as plugging them into the wall.

Q: All this talk about wireless power is nice, but can we feel confident that the technology is really safe?

The human body does not absorb magnetic energy like it does electromagnetic energy, so experts feel and testing indicates there will be no harm done. No patients have been harmed by the magnetic fields from significant testing, and these magnetic fields are orders of magnitude stronger than the ones surrounding magnetic resonance in use today.

Q: All of the back-and-forth over standards begs a question: if the industry were to embrace a single standard tomorrow, is the technology advanced enough to serve the needs of consumers? And can it deliver on the promise of a world without power cords?

In the ‘70s we embraced a standard for the cassette tape recorder.  When the CD player came out in the ‘80s it was more convenient and therefore took over from the prior standard.  I believe the same dynamic will hold true in wireless power.  Airfuel Alliance magnetic resonance technology will replace Qi inductive charging due to improved consumer convenience, efficiency, and cost for the majority of our consumer electronics.  Our TVs, kitchen appliances, computers, monitors stereos, lamps, digital assistants (e.g Amazon Echo or Google Cortana), Kindles, and cell phones will all be wirelessly powered, or recharged, as soon as they are set down on a flat surface.  The tables and countertops will be connected to the wall socket and those will be the only power cords that remain.

For longer-distance wireless power, such as might be needed for IOT sensors or mid-air refueling of drones, electromagnetic power transmission is the likely format.  Energous, and Ossia could have viable solutions for very low power applications (less than 1 W).  Solace Power has a very exciting solution for higher power applications, such as drones.  In its solution, rather than magnetic resonance, they employ capacitive resonance.  This, however, uses electromagnetic energy and therefore, is not really suitable in close proximity to humans.  It works very well installed on a rooftop and can deliver as much power as needed to charge a drone in mid-air that is one-half meter away, for example.

To summarise; indoor applications need to either use magnetic resonance (Airfuel) or low power electromagnetic power transmission (Energous, Ossia) to be safe, convenient, and efficient.  Outdoor applications can use capacitive resonance (Solace Power) to deliver the power needed for applications, such as drones for package delivery.

Q: How far away do you think we are from a future in which we have truly wireless homes?

In 2017, we are at long last at a breakthrough stage for the release and implementation of wireless power technology.  EPC recently demonstrated the ability to make entire table-tops be the source of safe, efficient, and economical wireless energy consistent with Airfuel Alliance standards.  The amplifier and antenna technologies are low-cost, highly efficient, and can be rolled out like wallpaper under our tables and behind the dry wall in our homes.

This technology, which was demonstrated in March at APEC 2017 in Tampa Florida, is based on GaN semiconductor technology, and should start showing up in furniture in the next couple of years.  Imagine having a kitchen where you do not need to plug in appliances.  Imagine a wall in each room where all you need to do is hang a flat-screen TV and it will be powered. Imagine your desk or conference room table that powers lamps, computers, monitors, and simultaneously charges everyone’s phones.  It’s all possible today, and I am convinced that the consumer wants it assuming it is safe (it is), efficient (it is), and does not cost a significant amount more than today’s solution with power cords (it doesn’t).

Nobody likes power cords.  Now we finally have an alternative.