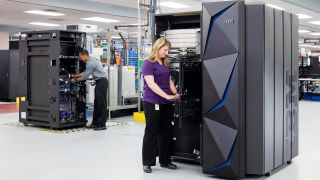 One of the more surprising consequences of the Covid-19 crisis is that it has intensified demand for mainframe programmers. Especially those who are experts in COBOL.

The huge spike in people filing for unemployment in the US as a result of the pandemic meant for instance that in the state of New Jersey the unemployment benefits system – a mainframe application written in COBOL – experienced a 1600 per cent increase in claims which it then struggled to process. As a result, the state’s governor put out a public appeal for experienced COBOL programmers to help support the system. Other state systems were reported to be experiencing similar problems.

The issue highlights yet again that many core enterprise systems are still run on mainframes and there is an ongoing shortage of qualified mainframe technicians to keep them ticking over. It has also raised a number of questions about the role of mainframes in a modern IT operation, and why hardware which has been around in some form for over 50 years (and even longer than that if you include pioneering technology such as 1952’s IBM 701) appears to be here to stay:

The fact is that, despite concerns over its age, for sheer power and resilience no other platform is yet able to match the mainframe. We still use mainframes because they are simply the best at processing high-volume transactions. They are also highly reliable and secure.

That is why mainframes continue to be relied on by many of the world’s leading enterprises, as well as by government departments. The ten top insurers, 44 of the top 50 banks, top retailers and major airlines all use mainframes to run their businesses. And, despite the fact that COBOL first emerged in the 1960s, a Reuters report reveals that there are still 220 billion lines of COBOL in use today. 43 per cent of banking systems are built in the language and 95 per cent of all ATM transactions rely on COBOL.

The mainframe is equally well suited to new workloads, too. Emerging technologies such as machine learning and blockchain are already taking advantage of the vast processing power of today’s modern mainframe computers. It’s worth remembering that, despite its longevity, mainframe hardware is not stuck in the past. IBM is continually investing in its flagship mainframes, introducing new models like the z15 which is one of the most scalable and resilient computers around.

Large organisations have stuck with the mainframe over the long term because it’s so dependable, and over time surprisingly little has changed from an application software perspective, in contrast with the advances on the hardware side. Many of the mainframe applications in use today are the same ones that were created in the 60s, 70s, 80s and 90s. And in general, they have been performing very reliably ever since. But most have been modified and added to over the years to support new business needs and technologies. So, while they may have been fit for the original purpose, the many changes in code coupled with modern day demands can mean that some applications no longer perform efficiently.

Sometimes the consequence of this is slow response times which ultimately can lead to the kind of operational delays and system outages that make the headlines. It also results in wasteful use of processing power which makes applications expensive to run. This is where application performance tuning tools can help by highlighting the specific areas of code that give rise to inefficiencies. Once hotspots are identified it is possible to generate fixes which improve performance, resulting in more efficient processor use and faster responses.

In many cases the people responsible for developing or modifying application code have retired or moved on, and over the years code changes have not been well documented. IT chiefs worry that making additional changes or applying fixes or updates will be risky, with nobody totally sure of the consequences. Add in the fact that there’s a shortage of programmers to support mainframe systems and you can see why problems occur.

Despite mainframes being the processing heart for many organisations’ core systems, most twenty-somethings trying to build an IT career today are turned off by the platform’s ‘green screen’ 3270 user interface. For developers brought up on modern programming languages and touchscreen mobiles devices, the mainframe’s native command line interface feels clunky and outdated. In short: the mainframe has a user experience problem.

This view was reflected in a survey conducted at the GSE UK mainframe user conference – which polled 48 mainframe users about accessibility and user experience. 60 per cent of participants complained that the 3270 interface looks less appealing than more modern interfaces and is difficult to get used to. 44 per cent said it requires investment in additional staff training and 71 per cent said that a shortage of IT staff with mainframe experience increases the need for more user-friendly alternatives to the green screen environment.

Skills shortages have been made worse by the fact that many academic institutions have stopped running mainframe-related courses. Even if you wanted to learn an ‘unfashionable’ language such as COBOL at university, you’d find it difficult. With so few IT undergraduates being exposed to the platform as part of their degrees, is it any wonder that they don’t even consider a mainframe career?

When some people talk about modernisation what they actually mean is rip up the original mainframe application and migrate to a new platform. This is by no means straightforward and there is risk involved in any migration. Many mainframe applications sit at the core of major commercial and public sector organisations. They simply have to be operational around the clock and a downturn in performance – let alone downtime – would be catastrophic. Organisations considering alternative platforms need to be confident that they can achieve the same levels of resilience and processing speed once off the mainframe, taking into account the throughput of the application that is being migrated.

There is also a financial dimension. Should a business with mainframe applications that are performing well throw them away and start afresh just because, say, the cloud is viewed as a more mainstream alternative? The cloud is sometimes seen as the answer to all ills but it is not necessarily a cheaper or more robust way of running a core business application when you look at the total cost of ownership.

There are plenty of alternative modernisation options to consider. One obvious approach is to update the interface to make it more intuitive and better suited to modern ways of working, including web and mobile enablement so that users can securely access applications remotely and while on the move. Modernisation tools also make it possible to adapt the application logic – for example to support new business processes, without changing the underlying code – and to add new capabilities on top of the application to make it easier to use, such as graphical dashboards or even chatbots that can support and train novice users.

Another consideration is introducing more modern development environments such as Eclipse and Microsoft Visual Studio Code, which the new generation of developers will have gone through college using. Increasingly, new application developments are a hybrid of mainframe and other core systems in combination with web and mobile technology. So, a single modern integrated development environment makes it easier for cross-platform teams to handle the end-to-end development across all technologies.

On the back of the COBOL problems in New Jersey and other states IBM has introduced a free training program to teach coders COBOL as well as new forums to match experienced COBOL programmers with enterprises that need help maintaining their critical systems.

IBM also has a continuing drive to encourage younger people to learn about mainframe computing. The IBM Z Academic Initiative involves IBM actively partnering with educational institutions around the world to integrate critical mainframe content into the curriculum. Its Master the Mainframe contest is encouraging mainframe enterprise computing and coding skills in more than 3,500 schools and universities in over 130 countries.

In addition, AI and chatbot technology has great potential for mainframe training. The technology has now advanced to the point where conversational interfaces can be built into or around mainframe software to support and train new users. Operating as digital trainers or guides, chatbots can help new recruits find their way around mainframe systems, answer technical questions and pass on relevant technical knowledge to make mainframe novices become productive faster.

Given the important role the mainframe still plays in the world, it’s clear that it is here to stay. In fact, some observers believe that a mainframe renaissance is underway. The mainframe and enterprise IT community are grasping the nettle and finding ways to solve the skills crisis. The renewed widespread publicity about this issue has shone a light on the career opportunities that are still available on IBM Z and the value of COBOL and other mainframe languages. It has also highlighted the important role of modernisation technologies in increasing the usability and appeal of this remarkable enterprise platform.