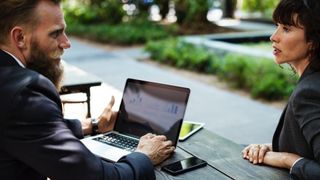 Rugged laptops are becoming a thing of the past, with an increasing number of businesses turning to newer, innovative tablets which include detachable 2-in-1 and slate form factors – providing all the benefits of traditional laptops, but with fewer downsides. This shift is reflected in the latest data from IDC, which projects that shipments of 2-in-1s will grow by more than nine per cent this year while traditional PCs will see a decline of nearly three per cent.

Slate tablets (like the iPad) can only use an onscreen or external keyboard. The difficulties associated with typing on an onscreen keyboard were initially addressed by the development of external plug-in or wireless Bluetooth-enabled keyboards that would provide a similar laptop-like typing experience. Yet, while this proved to be a useful solution, a further step was necessary in order to maximise effectiveness in rugged environments.

The term 2-in-1 only started to be broadly used after the first detachable tablets came around. Given the current rise in 2-in-1s, it’s worth taking a closer look to understand how they came to prominence.

The rise of detachables

The first rugged 2-in-1 tablet was a convertible that debuted around 2004. While that product was well-received for its flexibility, it lacked the ability to detach the keyboard, resulting in a very thick and heavy tablet – not ideal for a device that’s meant to be used while on the move.

Consumers and businesses wanted a tablet that could be used on its own and attach the keyboard only when extensive typing was required. For that reason, industry analysts started predicting detachable 2-in-1 tablets, instead of laptops or even convertibles, would be the portable computer of choice by 2012. Eight years later, and this prediction may finally be close to becoming reality.

While it has taken much longer for that industry transition to come to fruition, the growth of detachable 2-in-1s is now estimated at a much higher rate than that of standard laptops. Rugged tablet units were forecasted by VDC  to grow by eight per cent in 2019, while rugged detachable 2-in-1s were expected to grow by triple that amount to 24 per cent!

This growth is in stark contrast to the rugged notebook decline of one per cent year over year, indicating that the desire for 2-in-1s and the flexibility they provide, is very much in the ascendency. Here, we delve into what they offer that alternative laptops don’t.

For many businesses, typing in large amounts of data is not a regular requirement for employees on the move. Bulky rugged laptops, equipped with keyboards designed for this level of input, are not as well-suited to the typical demands of mobile workers who prefer a lighter, less cumbersome device.

For example, inputting figures while walking around a factory floor can be easily accomplished with a detachable 2-in-1, while the option to use a portable keyboard enables users to accomplish heavier data input whenever the need arises. With this in mind, it’s no surprise that detachable 2-in-1s have grown increasingly popular, while the traditional rugged laptop is becoming less so.

But what about convertible 2-in-1s? This earlier iteration of rugged 2-in-1s still exists in the market, though given the availability of good detachable options, they have become less popular and are almost solely reserved for non-rugged use cases. And while they do offer more flexibility than a traditional laptop, they are often used in a similar way – with workers nearly always carrying them with the keyboard on the forearm, as if they were laptops. As a result, convertible 2-in-1s are increasingly viewed as being not very distinct – if you want flexibility, opt for the detachable alternative. If you want a laptop, opt for a laptop.

Given the obvious benefits of 2-in-1 tablets for many organisations, the question is: Why has it taken so long for adoption to grow? Businesses previously chose rugged laptops over traditional tablets due to speed and connectivity options. Larger laptops, such as convertible tablets, could carry larger, more powerful processors and the batteries needed to keep them running for a full shift. They could also support greater connectivity options with more than a dozen ports, jacks, connectors, readers and radios, which early tablets couldn’t support. Essentially, businesses and workers were willing to accept the physical limitations of the laptop because it had a greater degree of reliability in the field.

This has now changed as today’s advanced rugged tablet processors are so small and efficient that many match those offered in laptops with comparable battery life, despite being much lighter, thinner and easier to carry and use on the move. Many rugged tablets are available as detachable 2-in-1s and offer features like front- and rear-facing cameras, which are rarely found on larger, heavier laptops, or even some convertible tablets.

From vegetation management for power companies to fire department inspections, work that needs to be completed on the move can be done with a rugged tablet, while more text-intensive tasks can be completed with a compact keyboard that can easily travel with workers to their jobsite. While rugged 2-in-1s tablets are offering the best of both worlds, the rugged laptop is looking more like the product of the 1990s that it was designed to be.