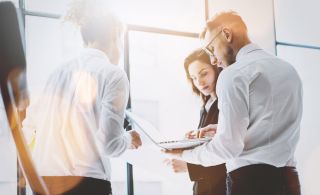 The road to becoming an IT professional is often thought to be a lifelong process,  however new research claims that this is not the case.

A new report from Spiceworks, entitled ‘A Portrait of IT Workers’, says 41 per cent of IT pros in the UK consider themselves ‘accidental’ – and that they ended up in their career via a ‘non-traditional’ route.

The report, which covers areas including the career plans and education levels of IT professionals, found that a third (33 per cent) of the UK’s IT job force don’t have a college or a university degree.

They are also more pessimistic about the IT job market – as less than a third (31 per cent) think positively of the future, compared to 43 per cent in the US. Almost half (46 per cent) don’t think they are paid enough, (although 41 per cent of their US colleagues think the same).

When it comes to working, British IT bods work 41 hours a week, ‘far above’ the 31 hour average across all industries. Almost all (89 per cent) see themselves as ‘somewhat stressed’ at work, with a quarter (26 per cent) reported being extremely stressed.

Less than a third (28 per cent) feel they have developed strong relationships with end user colleagues, compared to 42 per cent that feel the same way in the US.