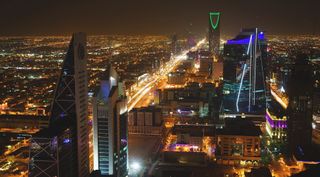 Alphabet is planning a major expansion in Saudi Arabia that could see the region emerge as the next significant technology centre.

According to the Wall Street Journal, Google's parent company is reportedly in talks with the Saudi state-owned oil company Aramco to invest into building a major technology hub in the region.

Talks have been ongoing between the two parties for some time, with Alphabet head Larry Page reportedly taking on a major role alongside Crown Prince Mohammed bin Salman.

One of the world's richest men, Prince Mohammed is aiming to bring the success of Silicon Valley to Saudi Arabia, funded by the country's incredible oil riches.

Last year, he revealed a plan entitled Vision 2030 aimed at reducing Saudi Arabia's reliance on the finite oil supplies, with technology forming a major part of this.

Part of the deal would see Alphabet assist Aramco in building data centres across Saudi Arabia, although it's not know exactly what function these facilities would aid just yet.

However establishing such a base across Saudi Arabia would hopefully encourage the rest of the country's technological goals, and give Alphabet a solid foothold in one of the world's richest countries.