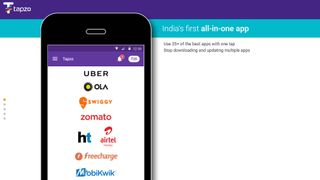 The e-commerce giant has paid around $40 million to acquire the startup that aggregates a number of app-based services into a single app. Tapzo users can place orders from a number of services including Uber, Ola, Book My Show and BillDesk all from within its app.

Amazon intends to leverage Tapzo's app to grow its Amazon Pay payment service in India. The Indian market is currently filled with a number of rival payment services such as Paytm, PhonPe, Google Pay and Mobikwik which will make it difficult for the US company to establish a foothold in the country.

According to Tapzo, its app has over five million users across 100 cities in India who use its service to access more than 40 different services. Since its launch in 2010, the company has been through a number of pivots and rebrands with Tapzo being the latest.

Neither Amazon nor Tapzo has officially released financial information or details on the deal but we will likely hear more once the acquisition is finalised.