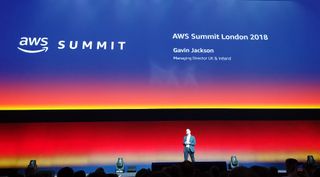 The UK head of Amazon Web Services has outlined his vision for companies looking at achieving true cloud success.

At the company’s AWS Summit event in London today, UK & Ireland head Gavin Jackson laid out his view of just what it takes to ensure your company can benefit from the new generation of cloud technology, whether large or small.

Jackson described what he called “accelerated metabolism of economies” - where current technology is evolving at such high speed as to allow unprecedented levels of innovation for companies.

Jackson noted that AWS was seeing high levels of development across every vertical as more and more companies are built in the cloud.

Amazon revealed in its most recent earnings call that AWS was one of the company's most lucrative operations, with a projected $22 billion in revenues for 2018.

Jackson was keen to highlight these numbers, particularly a 49 per cent growth in AWS business year-on-year, noting that such figures were, "unprecedented... there's no IT company in history that has grown that fast.”

This growth is being helped by the fact that companies large and small no longer need to build their own cloud infrastructure, Jackson noted, with the likes of AWS able to provide a steady and reliable service.

However a mix of technology, strategy and culture is needed to ensure cloud success, he stated, as well as a strong conviction to believe in cloud platforms.

Taking a prompt from his personal trainer, Jackson told the audience that, "to be truly agile, and compete over the next decade - you can't exercise digital and continue consuming high-calorie technology - you need to strip back the fat."