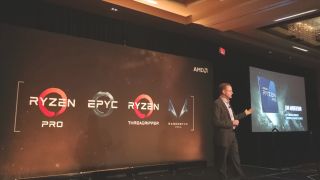 AMD has laid out its aim to make workplace PC and laptop devices more powerful thanks to its latest Ryzen Pro chips.

The company has unveiled the first enterprise computing devices that will feature its latest hardware, with the world's three biggest PC manufacturers all signed up for new releases.

At an event in New York this week, Lenovo, HP and Dell all revealed that they have new launches powered by AMD's newest Ryzen Pro chips scheduled for release over the next few weeks.

"This is a big milestone for the company."

AMD is targeting workers and businesses that are increasingly needing more powerful hardware in order to cope with data-heavy workloads. This includes developers needing to compile multiple streams of complex code, or animators or architects wanting to create 3D models.

In tests of everyday work asks, such as light Microsoft Office and Photoshop editing, AMD's new chips were neck and neck with Intel's offering - it was when the workload was bumped up to include major data sets or heavy rendering that the differences were truly seen.

"This is true productivity, redefined."

First revealed back in June, AMD's new Ryzen Pro chips are the company's most powerful to date, and a definite statement of intent as it looks to take on its great rival Intel.

Available in three distinct tiers, Ryzen Pro 7, Pro 5 and Pro 3, in order to compete with Intel's Core i7, i5 and i3 offerings respectively, the new AMD chips offer more cores and more threads, with the top-end Ryzen 7 Pro 1700 offering up to 62 per cent more multi-threaded performance than competing products.

The hardware is also AMD's most secure offering, featuring a built-in separate security processor with the silicon itself. Describing this as, "the ultimate protection against emerging threats", AMD says that this will also allow OEMs using this hardware to build their own customised apps to ensure even more security.

Products featuring the new Ryzen Pro chips will be on sale in the next few weeks, with Lenovo set to reveal its first-ever AMD-based enterprise notebook as part of the 25th anniversary of its iconic ThinkPad line.

HP and Dell are also offering desktop releases featuring the new hardware, with the former's EliteDesk 705 G3 targeting "the business of the future", and the latter's OptiPlex 5055 aiming to help secure Dell's space in the commercial desktop market.