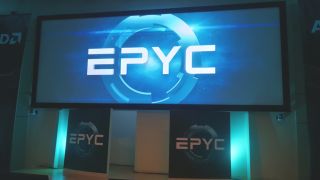 AMD has revealed another major win as it looks to grow the reach of its EPYC data centre processors.

The chipmaker has revealed a partnership with Dell that will see three new PowerEdge servers powered by its top-end hardware, first revealed last summer.

The new servers, which will feature AMD EPYC 7000 processors, will target enterprises looking to get their high-performance workloads under control, but also looking to get a handle on high overhead server costs.

Two of the new Dell servers, the PowerEdge R6415 and R7415, are single-socket systems, marking the first time that such small-scale hardware can carry out high-powered tasks. This is due to the EPYC 7000 being able to support up to 32 cores and 64 threads on one CPU, up to 4TB of memory capacity, 128 lanes of PCI Express interconnects, and support for up to 24 direct NVMe SSD drives - meaning one prcoessor can suffice where previously servers would have had to invest in dual-socket systems.

The R6415 is targeted at edge computing scenarios, as well as cloud apps in a data centre, with the R7415 looking at traditional storage arrays. The third new release, the R7425, is a dual-socket server, offering 64 total cores and 4TB of memory, meaning it can tackle high-performance workloads, analytics and big data.

“The Dell EMC portfolio of AMD EPYC systems excel in a wide range of workloads, including dense virtualisation, hybrid-cloud applications, software-defined storage, CAD/CAM, and other memory and I/O dependent applications.”

Dell was keen to emphasise how the new releases can lead to reduced costs for its customers, as single-socket solutions mean hardware costs can be greatly reduced - especially for enterprises looking to scale up their current arrangements.

“Customers are constantly looking for ways to drive growth and leverage new models of computing. AMD’s single-socket platform is a great example of Dell PowerEdge servers moving the industry forward to solve real customer problems. Together, we’re enabling customers to advance their datacentre transformation by adding capacity for higher IO and memory-intensive applications for highly configurable, single- and dual-socket designs.”