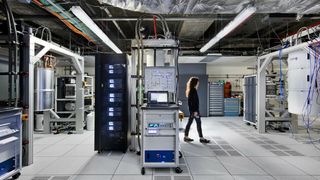 We now know who the first companies to work with IBM's quantum computers are. The company announced the creation of the IBM Q Network, a network of Fortune 500 companies that will use the IBM machine to “explore practical applications important to business and science”.

They will get the chance to run the company’s 20 qubit IBM Q system. However, a 50 qubit processor is already in the works, and it is only a matter of time before that one becomes available for use, as well.

“IBM sees the next few years as the dawn of the commercial quantum era – a formative period when quantum computing technology and its early use cases develop rapidly. The IBM Q Network will serve as a vehicle to make quantum computing more accessible to businesses and organisations through access to the most advanced IBM Q systems and quantum ecosystem,” said Dario Gil, vice president of AI and IBM Q, IBM Research.

“Working closely with our clients, together we can begin to explore the ways big and small quantum computing can address previously unsolvable problems applicable to industries such as financial services, automotive or chemistry. There will be a shared focus on discovering areas of quantum advantage that may lead to commercial, intellectual and societal benefit in the future.”

IBM also said it will set up regional hubs on four continents, to increase access to its quantum systems. These will be located at IBM Research, Keio University in Japan, Oak Ridge National Lab in the United States, Oxford University in the United Kingdom and the University of Melbourne in Australia.