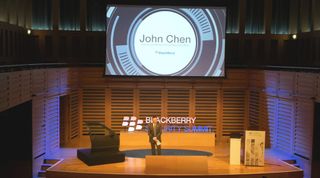 BlackBerry CEO John Chen has once again emphasised that the company has left behind its smartphone days and is now firmly set in its way to become one of the world’s top software firms.

Speaking at the company’s BlackBerry Security Summit event in London today, Chen said that although he was proud of the past, it was now time for a new focus.

“I love talking about heritage, but that only goes so far,” he told the audience during his keynote speech.

"We have turned around the perception of our company - our strategy for the executions are starting to add up, and our goal to be the number one enterprise security company in the world...this is only the beginning, this is not nearly the end"

BlackBerry officially exited the hardware business last September, when Chen confirmed that the company would now only look to licence its brand and knowledge out to partners around the world. This has led to the release of several new BlackBerry-branded devices being launched on the market recently, most notably by Chinese company TCL.

Last month, the company's most recent financial reports revealed that BlackBerry's software and services revenue hit a record $196 million in the quarter, resulting in a company profit of $19 million for that time.

However the days of BlackBerry as a phone company are now long gone, Chen emphasised, noting that the firm is now, “getting back on the positive track”.

"Three and a half years ago, two years ago - maybe even a year ago, everyone wanted to talk about keyboard phones,” he added. “We're very proud of our heritage, and we'll continue to license it...but we really need to get out of the hardware business, and into the software side."