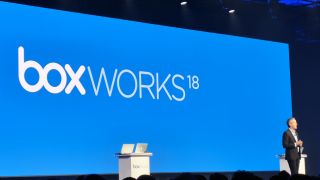 Box CEO Aaron Levie has called for businesses to embrace digital transformation at a greater scale if they hope to survive in this hugely competitive industry.

Taking to the stage for the opening keynote of the company’s Box Works 2018 event in San Francisco today, Levie noted that the future of work is in the digital age.

“We know that business is fundamentally different today," he said, "we know that something's going on in terms of how our organisations operates and how our competition works.”

“The only way to respond to this is to operate in a totally different way - every company must become a digital business.”

Levie noted that Box now works with 87,000 customers across the world, including 69 per cent of the Fortune 500, as it looks to help businesses becoming truly digital.

Box has rapidly grown due to its focus on providing customers with an easy to use and intuitive platform, and the company has increasingly added new features and systems in such a way as to blend seamlessly with how large organisations work.

Doing so, Levie says, helps organisations make the often-painful transition of digital transformation, which all too often is hamstrung by legacy infrastructure and data silos.

“At the heart of this is how we manage, secure and collaborate,” he said, “the future of work is going to be defined by how we get the most out of our data.”

Box revealed a host of new features and additions to its platform at the event, including an in-depth integration with Google’s G Suite for seamless working between the two platforms, as well as customised AI skills that will allow companies to tailor their experience using Box.

The company also unveiled a new Activity Stream feature which brings together all of a user’s notifications across all their apps in one central location, making collaboration easier than ever before.

"We're just getting started on delivering this,” Levie says, “we believe we'll see more changes in the way we work over the next three years as we have done over the last thirty."