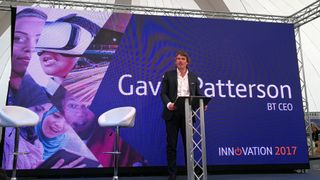 BT has called for technology companies across the world to work together in order to discover the next big step forward.

At a conference today, the company’s CEO, Gavin Patterson, has hailed the importance of the technology sector working together in order to spur on the UK’s research and development capabilities.

Speaking at the launch of BT Innovation Week, a week-long showcase of the company’s latest work at its Adastral Park headquarters, Patterson highlighted how collaboration could be the key to ensuring the country remains a leading light when it comes to future development.

Located just outside Ipswich, Adastral Park houses nearly 3,000 BT workers, and is also the base for the company’s tech incubator, as well as nearly a hundred of its other partners.

Patterson highlighted figures that showed BT had invested over £2.5 billion on research and development over the past five years, a major cause of the company being the third largest investor in R&D in the UK over the last decade.

However he noted that the key to uncovering the next big thing may sometimes be more a case of hedging your bets.

When asked which area of technology he thought would be the next boom sector, Patterson replied that it would be difficult to pick just one.

“The key for technological breakthrough is to back as many horses as you can, and back innovation,” he noted. “There are many things we're working on that have great potential...we want to be at the forefront."

"It’s not just about our own innovation, it’s about collaboration - history shows that companies who just look inward on their own technology, often miss out on real game-changers," Patterson added, “real innovation happens when you’re a part of an ecosystem.”

"Although we're proud of our history, we're even more proud of the role we're playing today, investing to keep the UK and our customers ahead," he said.

However Patterson did urge caution on the country’s stance following Brexit, noting that the decision to leave the European Union would be “a big risk”.

“With R&D the UK continues to be a world leader,” he said, “it's critical to the way we run the business...but the best research is collaborative ensuring we can continue to attract the best talent to this country...is really key"

"We need to make sure we don't lose that competitive edge...but it is pretty uncertain."