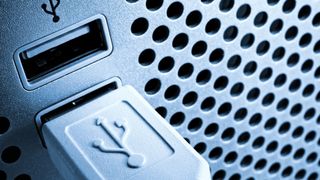 Flash drives which often change hands and devices, are generally considered as breeding ground for different malware and other malicious payloads. They can also be lost and stolen, and if a stolen device carries important data, that could result in a GDPR fine.

For those reasons, cybersecurity experts often warn organisations to be extra careful when allowing USB devices to their employees. One of the ways to stay secure is to keep the data on a USB device encrypted.

However, latest research from ESET and Kingston Technology says that more than half (55 per cent) of organisations don’t encrypt their removable devices. The report is based on a poll of 500 British business leaders.

“With GDPR one-year milestone just a month away, it is interesting to see what businesses are doing differently to protect themselves from cyber security issues and fines,” commented Jake Moore, Cybersecurity specialist at ESET.

“The survey reveals that companies are still not adequately protected from data leaks as this level of unencrypted devices means anyone can access personal data without security clearances. This poses significant security concerns for firms that do not have the processes in place to ensure their data is safe. One of the ways to do this is through the use of encryption. However, the survey reveals that password protection is still widely used amongst businesses even though it lacks in sophistication.”