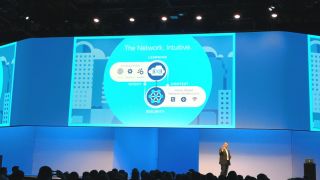 Cisco has laid out its aims to make the networks of the future smarter and more intuitive than ever before with the launch of several major new analytics tools.

At the company’s Cisco Live 2018 event in Barcelona this week, the networking giant unveiled its vision of the future of connectivity, based on its aim of intent-based networks.

Cisco says that it has trebled the number of devices connected to the network within the past few decades, and now expects to treble this number again within the next two years. This explosion means that more data than ever will be created and carried across networks, giving companies a greater opportunity to get more insight and analysis to benefit them.

It is pushing intent-based networking, where the network is intelligent enough to detect problems, then provide alerts and fixes to solve this, all on its own.

This includes the new Cisco Network Assurance Engine, which takes up Cisco’s aim to provide the largest amounts of insight possible for its customers.

The service looks to collect as much data as possible from a data centre, then use this create mathematically accurate models, giving an insight into what can happen or what could happen with a company’s network.

Also being released is Cisco’s new DNA Centre Assurance, a toolset that can offer real-time insight and analysis into an organisation’s entire network, but also dive down into individual users to identify and detect issues.

The launch continues a major trend for Cisco, has invested more in data analytics than any other networking company, including the billion-dollar acquisition of AppDynamics last year.

"The next wave of innovation for intent-based networking is about context,” said David Goeckler, EVP and GM of Cisco’s networking and security business, “this is one of the most important launches we’ve ever brought”.

"We're just scratching the surface of the power of these tools we've built."

Both services are available today as part of a subscription-based model, with Cisco eager to begin building its view of the hyper-connected organisation of the future.