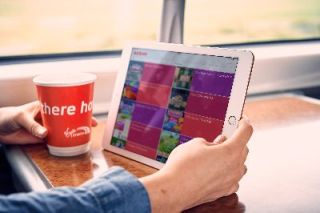 The company has teamed up with a number of partners, including ScotRail, CGI, Network Rail Telecoms and Wittos to develop a new platform called Project SWIFT that it says can provide 'superfast' Wi-Fi on trains.

ScotRail trains will soon begin trialling Project SWIFT, which can enable download speeds of up to 300Mbps, on routes across Scotland, including between Glasgow and Edinburgh, later this year, with the pilot lasting until march 2018.

Cisco says there are no plans to roll out the connections further across the rest of the UK just yet, but quoted recent research from Global Wireless Solutions that found one in three mobile internet tasks fail to be completed on trains.

This is largely due to the number of rural 3G and 4G 'black spots' covering the UK's train lines, but also the large amount of tunnels and cuttings across the network.

“Project SWIFT embodies the art of the possible. If the UK is to truly benefit from what digital technologies have to offer, then connectivity has to be a given – even when travelling at 140mph.” said Scot Gardner, chief executive, Cisco UK & Ireland. “If only a fraction of the time that we spend travelling is made more productive, the potential for commuters, the train companies and the UK as a whole is immense.”

The connections have already been tested by Cisco's CREATE division on a test track in the Midlands, and will use existing trackside fibre networks to backhaul data from trackside masts, which will use unlicensed Wi-Fi spectrum to connect trains, with Cisco claiming a lossless session handover between masts as low as two milliseconds.

The trial will utilise both existing and newly installed masts along the Edinburgh-Glasgow route, ensuring that coverage should be consistent along the line, even when going through tunnels and cuttings.

“We are delighted to be a part of this project. Our customers consistently tell us that one of the things that they expect on their journey is fast, reliable Wi-Fi," said Rob Shorthouse, ScotRail alliance communications director.

"This pilot scheme, which we are undertaking on behalf of the entire rail industry, will allow us to fully understand how we take our current on-train WiFi to the next level. We are really excited to be involved.”