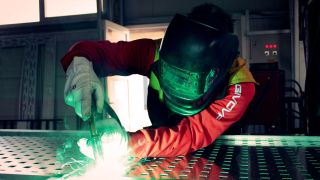 A new survey published by the German IT sector association Bitkom has revealed that two thirds of the country's manufacturers have fallen victim to a cyberattack costing Europe's largest economy around $50bn.

Bitkom surveyed 503 of the top managers and security chiefs across Germany's manufacturing sector to discover that the SMBs that form the backbone of the country's economy are particularly vulnerable to cyberattacks.

German security officials have often warned of the danger of foreign spy agencies using cyberattacks as a means to steal the country's advanced manufacturing techniques that have helped it become one of the world's leading exporters.

Bitkom's survey identified a number of risks across the industry with a third of the companies surveyed reporting their employees' mobile phones had been stolen and a quarter saying they had lost sensitive data.

The survey also found that cybercriminals had employed other techniques to disrupt German manufacturing. Of those surveyed, 19 per cent said their IT and production systems had been sabotaged digitally while 11 per cent reported that their communications had been tapped.

Businesses looking to get ahead of their rivals could easily employ cybercriminals to learn more about their competition and in today's digital world it is likely we will see continued attempts to steal sensitive company data and disrupt manufacturing operations.