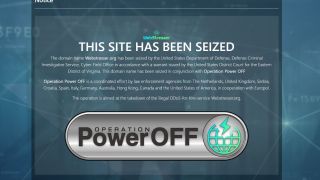 Following a major international investigation, a website blamed for launching four million cyberattacks globally including numerous attacks on UK banks has been taken down by the authorities.

Webstresser.org which allowed criminals to pay for distributed denial of service (DDoS) attacks against businesses has been taken down by Operation Power OFF, a joint effort by law enforcement agencies in the UK,  US, Canada, Australia, Hong Kong and others in cooperation with Europol.

Last year the site was used by a British suspect to coordinate attacks on high street banks that cost hundreds of thousands of pounds of damage.

Investigators revealed that Webstresser was selling cyber-attacks for as little as $14.99 and that individuals could order an attack with very little chance of being traced.

The seven suspected members of the group behind the site were arrested or searched by local authorities in the Netherlands, Serbia, Croatia and Canada with support from the US authorities, Europol and Police Scotland.  The operation was then completed by Dutch police who identified the location of Webstresser's servers and seized them.

The lead investigator for the National Crime Agency, Jo Goodall stressed the point that cybercriminals can not expect to remain anonymous online forever, saying:

"Cyber-crime by default is a threat that crosses borders. The arrests made over the past two days show that the internet does not provide bulletproof anonymity to offenders and we expect to identify further suspects linked to the site in the coming weeks and months. We have seen how cyber-attacks have real-world consequences resulting in actual physical harm, as well as causing reputational and financial damage to businesses of all sizes.”