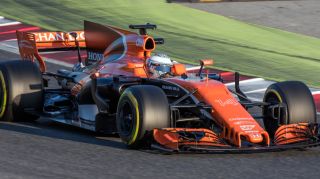 Dell has revealed a new partnership with motorsport legends McLaren that could signal a smarter future for the latter's high-powered vehicles.

The computing giant says that it will bring "deep technology expertise" to all of the McLaren Group companies and brands, including its Formula 1 team and McLaren Applied Technologies, which works across Formula E, NASCAR and IndyCar racing.

"We are like-minded organisations led by the key principles of technical innovation and human progress at the cutting-edge of data-driven technology. Formula 1 is a relentless environment, and partnering with Dell Technologies provides us with class-leading capabilities and support to drive invaluable efficiencies that will enable McLaren to perform at the highest possible level across our entire business operations. "

“This announcement is a further statement that McLaren has strong ambitions as we strive to take an important leap in performance both on-track and off it. Dell Technologies is the perfect partner and our two brands share the same ethos, which will propel us towards our business objectives for 2018 and beyond.”

McLaren says it has been undergoing an IT transformation for some time, the company says, and recently completed the first part of this by introducing a range of advanced data centre services utilising Dell EMC hardware.

The two companies will now look to collaborate on a range of technology-related projects, including work on security, cloud and workplace transformation efforts.

“Dell Technologies’ relationship with McLaren builds upon a shared heritage of innovation, engineering excellence and high performance," added Jeremy Burton, chief marketing officer, Dell Technologies. Over the past few years, McLaren’s rich history in motorsports has given rise to a more diverse and ambitious organisation that we’re excited to partner with."

“Our partnership is expansive, enabling us to showcase our Dell Technologies portfolio from consumer gaming and esports to the enterprise edge, data centre and cloud."

“We look forward to playing a transformative role within every facet of the McLaren Group, both trackside and at the McLaren Technology Centre. It is the first time we have partnered as Dell Technologies in a global commercial agreement of this nature, and we look forward to a long-term collaboration.”