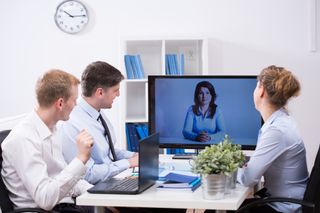 Almost three quarters (72 per cent) of workers in the UK and US agree that video calls are a more effective work communication channel than voice calls.

According to a new report by Kollective entitled Generation Now, almost two thirds (64 per cent) of workers now trust a message more if they see a person actually delivering it.

Six in ten of the 2,000 workers surveyed across the US and UK also found visual content easier to consume, the study said, and almost half (46 per cent) can’t be bothered to read long emails or documents, the report stated.

“In general, videos have a better level of engagement because there’s a greater opportunity for people to understand what it is that they’re trying to learn and the messages that are going out,” commented Mark Gibson, digital consultant at Nationwide.

But it’s not just during work – people are consuming video content at an increasing rate. Almost two thirds (65 per cent) use YouTube to receive information in their personal lives. Among 18 – 24 year-olds, that figure jumps to 82 per cent. Four in ten workers use YouTube every day, and a third uses live streaming social media services, as well.

“Today’s workers place a high value on seeing the people they are communicating with across their organisation. With increasingly dispersed and mobile teams, engineering that face time and real-time connection is critical, particularly with executive teams,” said Dan Vetras, CEO of Kollective.

“Today’s employees are already accustomed to using the latest communication technologies in their personal lives and it’s time for organisations to integrate video and live streaming applications into employee communication strategies. Video communication not only means that information is transmitted in an accurate and a timely way, but ensures workers are communicated with openly to benefit employer-employee relations.”