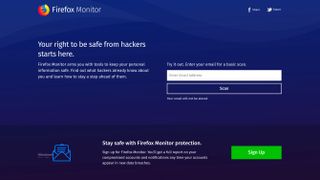 As data breaches have become increasingly common on the Internet, Mozilla is releasing a new service to help users know if their personal information has been exposed.

The new service called Firefox Monitor can check to see if a user's personal information has been compromised by any of the numerous data breaches that occur each year. The company is also providing the option to register with the service so that it can proactively alert you if you happen to fall victim to a data breach in the future.

Mozilla's new service is a result of a partnership with the site Have I Been Pwned which has been offering similar functionality since its launch in 2013. However, Firefox's install base will allow even more users to benefit from the service even if it functions in much the same way as the site.

Knowing if your personal details have been exposed is just the first step and Mozilla recommends using a different password for each account, creating strong passwords and using two-factor authentication to prevent falling victim to a data breach.