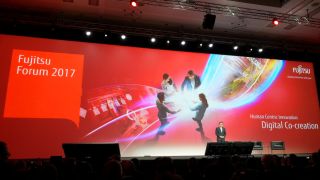 Fujitsu is one of the world’s most well-known hardware providers, with involvement in a wide range of industry sectors and verticals, particularly across Europe.

At the company’s recent Fujitsu Forum 2017 event in Munich, the company’s UK & Ireland chairman and head of EMEIA product business Michael Keegan spoke to ITProPortal about his priorities and strategy for the months ahead.

The lead-up to Forum 2017 had been overshadowed by the news that Fujitsu was selling a 51 per cent stake in its laptop client computing business to Lenovo, which had led some observers to wonder if a takeover was imminent.

However Keegan was keen to urge that this was not the case, and that the partnership could in fact lead Fujitsu on to greater and wider success than ever before.

"What (the deal) enables us to do...(is) get the benefits of Lenovo's scale in that market and get the benefit of our scale, which, when combined, gives us a bigger negotiating ability," Keegan noted.

Keegan highlighted that Fujitsu was looking to grow its UK sales force in anticipation of future growth following the deal, and that there were not set to be any price rises expected.

"Fujitsu is a great partnering company,” Keegan added. “If you think about the big things that are going on in technology in terms of moving to cloud, big data analytics, the searching of unstructured data...what we are doing in our product business is to take to market pre-installed, pre-bundled packets of capability in all these major areas that IT is really moving into, and developing in, in order to give our customers pre-packaged, easy-to-run solutions."

Elsewhere, Britain’s exit from the European Union may have caused many companies to rethink their overall strategy looking ahead to the next few years, but Keegan says this is not the case for Fujitsu.

"We don't have a UK-centric view, but an end-to-end view,” he says, "what we want is for the politicians not to make a mess of it...we don't want this process to take us backwards, whether on the UK side or the EU side."

Keegan, who is also deputy President of trade body TechUK and the organisation’s Brexit spokesperson, adds that Fujitsu isn’t anticipating Brexit to get in the way of future growth, but that three objectives need to be reached in order to do so.

Top of the list is that data is able to be transferred adequately both in and out of Britain and the EU, as he notes, "it is exceptionally important that UK data is deemed adequate by the EU, and vice versa...it is in mutual interest for both parties to get this issue resolved correctly."

But the deal will also require the ability for skilled labour to cross borders, and at speed, in order to fill the growing IT skills gap, and for a customs union that ensures goods can also be easily transported across the continent - both major concerns for a company like Fujitsu that manufacturers, exports and imports goods across multiple European nations.