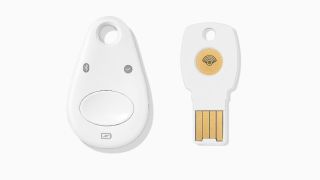 Google recently made headlines when the company revealed that it had prevented its own employees from falling victim to phishing attacks by switching from two-factor authentication (2FA) to physical USB-based Security Keys.

Now the company has made its Titan Security Key available to all in the Google Store with a full kit available for $50.

The kit itself includes a USB key, a Bluetooth key, a USB-C to USB-A adaptor and a USB-C to USB-A cable. The key was only previously available to Google Cloud customers but now anyone looking to better safeguard their accounts and devices can purchase one directly from the company.

The Titan Security Key is built to the FIDO standard and works as a second factor for services such as Facebook, Dropbox and Github. However, the keys were designed to work seamlessly with Google account logins as part of the company's Advanced Protection Program.

Google explained how its Titan Security Keys have been designed from the ground up to be resistant to compromise in a statement announcing the release, saying:

“Titan Security Keys are designed to make the critical cryptographic operations performed by the security key strongly resistant to compromise during the entire device lifecycle, from manufacturing through actual use. The firmware performing the cryptographic operations has been engineered by Google with security in mind. This firmware is sealed permanently into a secure element hardware chip at production time in the chip production factory. The secure element hardware chip that we use is designed to resist physical attacks aimed at extracting firmware and secret key material.”

There is currently a waitlist for Titan Security Keys on Google's site but users can enable security keys for their Google account on the two-step verification page or by signing up for the Advanced Protection Program.