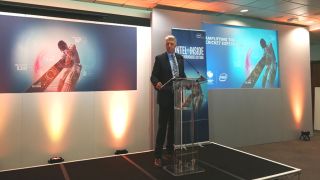 The 2017 ICC Champions Trophy is set to be possibly the smartest sports tournament ever thanks to a new partnership with Intel.

The technology giant has revealed details on a number of new technology platforms it is launching to help make this year’s tournament, which kicks off in London on Wednesday, the most connected to date.

This includes an all-new approach to media analysis, as well as a chance for cricket aficionados to get a real hands-on experience that will help them improve their own game.

However fans attending any of the games at Lord’s and The Oval in London, as well as Edgbaston in Birmingham, will be able to benefit from free and fast Wi-Fi in the stadium, as well as enjoy a futuristic Virtual Reality experience that puts them at the heart of the action.

In a first for a sports tournament in England, Intel-powered drones will scan every inch of the wicket at the three grounds to provide in-depth information on the state of the pitch, crucial information for players, fans and commentators alike.

For example, the scans (example pictured below) would give real-time information on how the pitch is faring during the day’s play, and whether it would benefit spin or seam play.

“Our long term vision is to make cricket the world’s most popular sport, and we need to engage the fans,” ICC CEO David Richardson (pictured above) said at the launch event at the Oval today.

“We need to offer premium content and use technology”, he added, “If the technology is available to enhance the cricketing experience, then over the years we’ve shown a  willingness to support it.”

For players fans looking for that little extra, Intel, which has previously partnered with major sports tournaments including Spain’s La Liga football and the PGA golf circuit, is also supporting the launch of BatSense, a new service which allows players to monitor their own performance.

Taking the form of a small accessory that clips onto the top of a cricket bat, the product contains a multitude of sensors that will provide real-time information on their stance, movement and even the speed they swing their bat.

This information can then be used to create a 3D avatar of the player, allowing them to analyse their strengths and weaknesses in a far more advanced way than has ever been available before.

“We think this of a technology that can be the difference between playing club cricket and international cricket,” Intel’s Anuj Dua declared.

BatSense will be used by a number of top players during the ICC Champions Trophy, before going on public sale in August across the world.