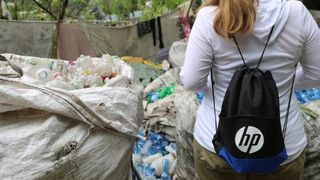 HP has unveiled plans to revolutionise the way it works to provide a range of environmentally friendly business practices.

The PC giant has pledged to cut the amount of greenhouse gases and waste material generated in making its products within the next ten years as it looks to promote sustainability within what it calls the “circular economy”.

The announcement comes as HP unveils a new sustainability report which details the steps that the company is looking to take in order to cut waste and improve skills across the board.

The HP 2016 Sustainability report details how HP is looking to cut greenhouse gas emissions from its global operations by 25 per cent by 2025.

Among its other pledges are a promise to cut emissions from its product portfolio by 25 per cent by 2020 compared to 2010 levels, and a commitment to source 40 per cent of renewable electricity across its global operations by 2020.

HP has already launched a number of projects as it looks to work towards these goals, with supply chain and printing highlighted as two major areas.

The former sees HP looking to double factory participation in its supply chain sustainability programs by 2025, working directly with its suppliers to cut greenhouse gas emission.

Today’s report details how the company has already seen a 21 per cent decrease in its supply chain emission levels compared to 2010, along with a 16 per cent drop in greenhouse gases generated by its product transport operations during the same period.

But HP is also making great strides in its printing operations. The company’s Instant Ink service, which sees internet-connected printers order replacement cartridges when it senses ink levels are running low, has been hailed as greatly helping to cut down plastic waste and boosting recycling.

HP now makes its ink cartridges from a mixture of recycled products, special resins, and upcycled material sourced from other areas such as plastic bottles. The company says that it recycles over a million of the latter every day, and is working with NGOs in some of the world’s poorest countries to help encourage new projects which also help boost local economies.

Looking forward, the growth of 3D printing is also expected to provide a major opportunity for sustainability. HP envisages a future where, if a tiny plastic part of one of your home appliances breaks, you can download a blueprint of the piece and print it yourself, rather than needing to send off for a pricey replacement, or even buying a whole new product entirely.

"We see the same opportunity here...to take waste out of the market,” Glazer (pictured above) noted, “(we’re) moving away from a mass production model to one where you can match supply and demand."

“There’s real potential to scale the circular economy,” she concluded, “the new technologies that are converging will help us tackle the problems that we all face."