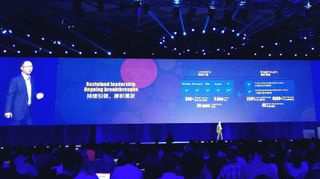 Huawei has revealed more about the benefits it believes its cloud platform brings to companies and organisations around the world.

Speaking at the Huawei Connect 2017 event in Shanghai today, a senior company executive told attendees that only through effective connections can the cloud really begin to realise its true potential.

"We don't cloud because others do it...Huawei Cloud is based on others, so it has roots. Connections make the cloud more important - if the cloud stays up in the air, it will not deliver its true value."

"We believe that connections and the cloud are the two engines powering the digitisation of enterprises and governments around the world."

The company clearly sees cloud as an important growth sector, as Wang noted, "Looking around the world, we see many companies can connect, but few can connect many...Huawei is the only one that can do a good job in both cloud and connection."

Since its launch back in 2015, Huawei Cloud has seen enormous growth, with around 4500 new features and 40+ apps coming to customers in less than 18 months.

Huawei confirmed this week that its cloud division was now being elevated to a standalone business group within the company, and showed off a number of major customers at the Connect 2017, where companies including Orange Business Services, Schindler and ABB China taking to the stage.