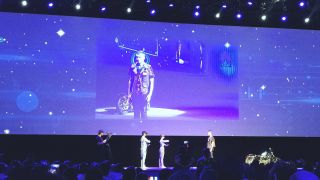 Huawei has revealed a new cloud platform that it says will go a long way towards making the world a smarter and more connected place.

At this week's Huawei Connect 2017 event in Shanghai, the company showed off its all-new Enterprise Intelligence (EI) service, which should allow enterprises to adopt new and more powerful digital solutions quicker than ever before.

Taking to the stage to announce EI, Zheng Yelai, president of Huawei's cloud business unit and president of the IT product line, said that the service would mark a major step forward in the development of cloud computing as a whole.

"The best cloud must be able to deliver the services that customers need, and AI needs to create more value for enterprises. To make this happen, we have to integrate single-point techniques and apply them, together, in sophisticated enterprise scenarios,” he said.

“We're positioning Huawei Cloud as an enabler of the intelligent world. It provides AI, IoT, computing, and storage capabilities that provide enterprises with more innovative, intelligent cloud services. Through Huawei Cloud, we are essentially exposing our most formative achievements and practices in R&D – which we've built up over many years – to governments, enterprises, partners, and developers."

The launch of EI forms part of Huawei's ongoing cloud push following the launch of its standalone cloud business group back in 2015. The company is now looking to expand its offering and take on the likes of AWS and Microsoft Azure by combining traditional cloud platforms with powerful artificial intelligence tools to offer enterprises more insight into their cloud services.

But Huawei is also able to offer tailored scenario-specific versions of EI to target certain verticals, several of which it showed off at Huawei Connect.

This included several scenarios aimed at helping smart cities and governments thanks to the platform's powerful image recognition technology. This included use cases such as facial recognition to spot criminals or identify missing children, and detecting drivers not wearing seatbelts or committing traffic offences such as going through red lights.

In the workplace, the EI platform could also help with supply chain issues, being used to improve scanning of warehouse products, or streaming live video of maintenance issues.

Huawei has already put the service into place in its own processes, using EI for intelligent packing solutions in its logistics, as well as for compliance analysis during the customs clearance stage.