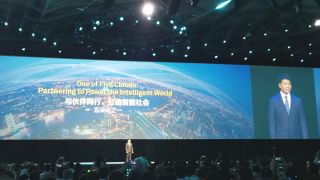 Huawei has laid out its bid to kick-start the next generation of cloud computing.

At the Huawei Connect 2017 event in Shanghai today, rotating CEO Guo Ping pledged that the company is committed to building "one of the world's five clouds" to benefit enterprises around the world.

Harking back to the 1948 prediction of IBM founder Thomas Watson that there would only ever be a worldwide market for five computers, Ping stated that Huawei is now looking for a similar ideal for cloud platforms in a bid to push forward collaboration and innovation.

"Society is experiencing a tangible Matthew effect in digital technology development. Because of this, as well as economies of scale in investment, clouds around the world will begin to converge – becoming more and more centralised. In the future, we predict there will be five major clouds in the world."

Similar to the existing airline collaborations such as OneWorld or Star Alliance, Huawei is hoping to create global alliances of cloud computing, working with partners around the world.

"We hope that in the future customers will be able to ask for Huawei cloud and be able to connect to the entire world," Ping said.

"Huawei will work with our partners to build one of those five clouds, and we've got the technology and know-how to do it."

Noting that "cloud has become a major cornerstone of the IT world", Ping (pictured above) said that Huawei is also committed to long-term investment in public cloud, which will largely be directed to, "building a hybrid cloud addressing the needs of both governments and enterprises."

"Huawei's Cloud DNA is made of a unique combination of technology, security, services, and shared success," he noted, claiming that, "only 2-3 companies in the world can do what we do," adding that around 50 per cent of the global population interacts with, or uses Huawei networks, in some way.

Huawei Cloud also differs greatly from other platforms in how it treats its users, and how it interacts with their data.

"In 2015, we launched our cloud strategy, and we said that our public cloud wouldn't touch the customer's applications or data."

"We do not monetise from user data," Ping emphasised, noting that instead, Huawei will provide the technology and services needed to help users monetise their data themsleves, and will not coerce customers to share data with the company.

However building this cloud would not be a solo operation, as Huawei cloud business head Zheng Yelai stated that, "we are willing to work with our partners to embrace the challenges of digital transformation."

"Our people have an in-depth understanding of our customers' business scenarios, whether they're working in R&D, marketing, or sales. We keep a close eye on the needs of our customers, and innovate accordingly. We've developed Huawei Cloud to help enterprises go digital more smoothly, and help ensure the success of more companies who are willing to innovate."

"We won't just build cloud for the cloud's sake."

The move is part of Huawei's global push for digital transformation, with the company keen to press forward and grab opportunities whilst it can.

"In this era of great opportunities, we refuse to be opportunistic," Ping noted. "Huawei has never taken shortcuts, and we never do - the same applies to Huawei Cloud."