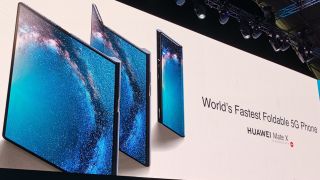 Huawei has taken the wraps off its Mate X foldable smartphone at Mobile World Congress 2019.

The Huawei Mate X features three screens in one device, with a 6.6in front screen can be folded out into an 8in tablet-esque form thanks to the company’s flexible OLED display.

But there’s also a 6.38in rear screen, allowing multiple different viewpoints, with the device sporting a unique “Falcon Wing” design that allows for maximum flexibility, and a device that is only 11mm thick when folded over.

Unfolded, the Mate X is only 5.4mm thin - thinner than most tablets on the market today according to Huawei. It has been designed to be held in one hand, featuring an ergonomic grip that makes it comfortable to hold even in tablet mode.

Taking to the stage at the company’s MWC 2019 launch event in Barcelona today, Huawei CEO Richard Yu said the device was "the future of design and the future of technology".

Yu also noted that the Huawei Mate X is 5G-ready, sporting the company’s Kirin 980 CPU alongside its Balong 5000 5G modem, all wrapped up in a 7nm chipset. This hardware allows the Mate X to support downloads of up to 4.6GBps, ten times faster than current 4G networks, and according to Huawei, twice the speeds currently allowed by the current standard of 5G networks.

All of this is powered by a 4500mAh dual-battery set-up which can recharge faster than ever thanks to Huawei’s SuperCharge technology, meaning it can restore to 85 percent capacity in just 30 minutes.

The launch follows Samsung’s reveal of its foldable device, the Galaxy Fold, last week, and indicates a major shift in the smartphone industry’s focus towards more flexible handsets.

However the Mate X will cost far more than Samsung's device, with Yu revealing the cost of the new phone at 2299 euros when it goes on sale in the middle of 2019.