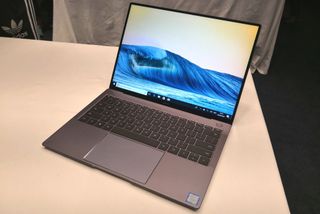 Huawei has revealed its attempt to topple Apple’s dominance of the high-end enterprise PC space with its latest Matebook laptop device.

Built on aviation-grade alumninum and weighing in at just 1.33kg, the Matebook X Pro is just 14.6mm at its thickest part, and 4.9mm at its thinnest - making it an incredibly portable option for workers on the go.

Inside, Huawei has teamed up with Intel for enterprise-optimised hardware. The Matebook X Pro is powered by an up to 8th gen Intel Core i7 8550U chip, with Huawei opting to replace the M series chip seen in the previous iteration as it targets productivity over efficiency.

This is backed up by up to 16GB RAM, 512GB storage, and a huge 57.4wH battery that should comfortably last a full day. The latter is also equipped with power-saving management technology that further boosts battery life by re-allocating resources, giving what Huawei says is up to a 15 per cent improvement in efficiency.

Huawei has also imbued the Matebook X Pro with several useful tools and features that should ensure it lives up to its enterprise-friendly briefing.

The device supports Windows 10, with Micrisoft's Kurt Peterson highlighting how features such as Cortana and Windows Hello will be key tools for the Matebook X Pro.

"Huawei and Microsoft are hard at work on many areas...across a range of devices."

Alongside two USB-C and one USB-A ports, the device also features a built-in quad microphone that can pick up sound from up to four metres away, making it ideal for conference calls.

As for security, the device features an independent security chip that holds information including the fingerprint-enabled login service. Huawei has once again put a fingerprint sensor on the Matebook X Pro's power button, allowing for a quick one-step activation process which the company says takes just 7.8 seconds to start up.

Alongside the Matebook X Pro, Huawei also showed off three new tablets, including the MediaPad M5 Pro. Huawei says that the 10.8in device can offer a true 2-in-1 PC experience thanks to its own dedicated file management system, and the specifically-designed M-Pen stylus.

The Matebook X Pro will go on sale in the second quarter of 2018, with prices starting from 1499 euros, with China, the US, Germany, Italy, Saudi Arabia and Spain the first nations to see the device.