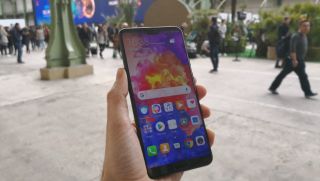 Huawei has taken the wraps off its most powerful smartphone releases to date in another major statement of intent in the mobile industry.

The new Huawei P20 and P20 Pro devices could lay claim to being the company’s smartest ever mobile device, featuring advanced AI learning tools and arguably the most powerful smartphone camera around today - and in an industry first, a triple rear camera.

Huawei has kept a similar strategy to its previous launches, unveiling not just the P20 smartphone but also a supercharged P20 Pro device alongside a cheaper, less powerful P20 Lite offering.

The P20 Pro is by far the heavyweight of the group, sporting a 6.1in OLED FullView display, and powered by a Kirin 970 processor and 4000mAh battery.

Huawei says that the P20 Pro is, “the most intelligent smartphone ever”, with an AI “base layer” emphasising this aspect - particularly with its super-smart photography tools that will ensure users always get the best and sharpest shots, even in low light.

However the P20 itself is no slouch, featuring a 5.8in display, 4GB of RAM and 128GB storage. Both devices also feature Cat 18 LTE, meaning they will support download speeds of up to 1.2GBps, or what Huawei calls "4.5G".

Both devices will be on sale in the UK from April, with pre-orders open today.

“We look for inspiration from artists to continuously evolve our approach to design and innovation,” said Richard Yu, CEO of Huawei consumer business group.