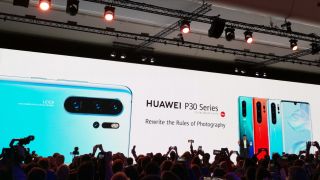 Huawei has unveiled the company's latest smartphones in the latest step on its quest for world domination.

The Huawei P30 and P30 Pro were revealed at an event in Paris today, marking a major leap forward for the Chinese mobile giant.

Taking its usual step of launching multiple devices at the same event, the P30 and P30 Pro focus heavily on photography, introducing "the ultimate evolution" in mobile photography with their 40MP Leica triple-lens camera set-up.

The P30 Pro is the more powerful of the two, sporting a 6.47in FHD+ curved OLED display and 4200mAh battery which can be topped up to 70 percent full in just 30 minutes using Huawei’s SuperCharge technology, but weighs just 192g.

Inside is Huawei's own 7nm Kirin 980 processor, 8GB of RAM and up to 512GB storage, alongside dual-SIM capability.

Inspired by "the beauty of nature", both devices sport an ultra-small notch, in difference to the Mate 20 Pro, with a minimalised bezel that means a more compact display than ever. It will run Huawei's own EMUI 9.1, backed up by Android 9 Pie, meaning your favourite Android apps will all be present and correct.

The device sports the in-screen fingerprint scanner seen in previous devices, but 30 percent faster than before, and are IP68 water and dust resistant.