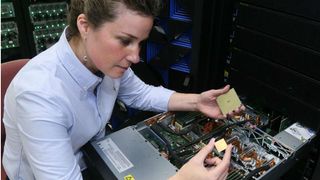 IBM has revealed a new processing chip that can tackle the increasing demands of contemporary software using services such as artificial intelligence or machine learning.

The new Power9 chip will be available on IBM's cloud as well as being offered to third-party manufacturers and cloud vendors, such as Google.

“We generally take our technology to market as a complete solution,” said Brad McCredie, IBM fellow and vice president of cognitive systems.

Besides offering the technology through its own cloud, and selling it to others, the Power9 chip will also be included in IBM’s new AC922 computing platform.

“Power9 is a chip which has a new systems architecture that is optimized for accelerators used in machine learning. Intel makes Xeon CPUs and Nervana accelerators and NVIDIA makes Tesla accelerators. IBM’s Power9 is literally the Swiss Army knife of ML acceleration as it supports an astronomical amount of IO and bandwidth, 10X of anything that’s out there today,” Moorhead said.

“Modern workloads are becoming accelerated and the Nvidia GPU is a common accelerator. We have seen this trend coming. We built a deep relationship with them and a partnership between the Power system and the GPU. We have a unique bus that runs between the processor and the GPU and has 10x peak bandwidth over competitive systems,” McCredie added.

As of now, the chip is available.