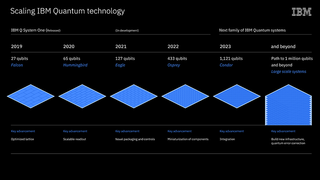 Today's quantum computers, although more powerful (in certain scenarios) than any commercial device out there, are still yet to fulfil their potential. This could change relatively soon, however, as IBM has just announced its roadmap for scaling the technology to new heights.

Published by IBM Fellow and Vice President at IBM Quantum, Jay Gambetta, the roadmap explains IBM is looking to build a device capable of reaching 1,000 qubits by 2023. For context, the current most powerful quantum computer reaches 65 qubits, according to Science.

In 2023, the company is aiming to deliver the IBM Quantum Condor processor, reaching 1,121 qubits.

“We think of Condor as an inflection point, a milestone that marks our ability to implement error correction and scale up our devices, while simultaneously complex enough to explore potential Quantum Advantages—problems that we can solve more efficiently on a quantum computer than on the world’s best supercomputers,” wrote Gambetta.

“All the while, our hardware roadmap sits at the heart of a larger mission: to design a full-stack quantum computer deployed via the cloud that anyone around the world can program.”

The ultimate goal, Gambetta explained, is to host quantum computing resources in the cloud, for all to use.