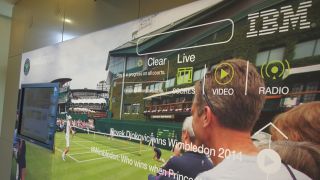 This year’s Wimbledon tennis championships could be the most immersive, intelligent and interactive ever,

The All-England Tennis Club (AELTC) has today revealed details of its expanded technology partnership with IBM as it looks to start a new era of how fans enjoy the two-week tennis extravaganza.

This year’s tournament will see IBM connected technology used to greatly enrich the fan experience, whether watching at home or at the grounds, providing more in-depth information and statistics than ever before.

"The pace of change isn't going to slow down...whilst we don't want to be at the bleeding edge, we certainly want to be at the leading edge of innovation," AELTC commercial director Mick Desmond told media today.

"We're never happy in our pursuit of greatness, we always want to continue to raise the bar...we take nothing for granted."

IBM has designed an all-new insight platform that will be able to detect and identify the most exciting matches at the championships using a mountain of real-time data.

Named IBM SlamTracker with Cognitive Keys to the Match application will provide scores, stats and insights for fans, pundits and coaches alike, including for the first time special “keys” - particular tactics the players might  undertake at certain point of the match.

The information will be collated from real-time data from multiple sources, including courtside statisticians, chair umpires, radar guns, ball position, player location and even social media to gauge viewer  sentiment.

For those nail-biting, edge of your seat moments, IBM will identify “pressure situations” within a match (such as down 0-40 in a game, down 2 sets). These insights will show the historical performance for a player when in the specific situation, revealing hidden patterns in player and match dynamics to determine the pressure situations.

Fans attending the 2017 Wimbledon championships will be able to plan their visit to the grounds, and their day at the tournament, using a new mobile AI assistant. Powered by IBM’s Watson technology, “Ask Fred” (pictured below) will be able to answer a number of question from fans visiting the show, allowing them to navigate around the grounds with ease.

IBM and the AELTC will also evaluate the data collected by the app after the tournament in order to better anticipate fan demands and needs for next year, and the coming years.

"We've tried to prove that you can do digital differently,” AELTC head of communications, content and digital Alexandra Willis added, “you can do digital and beautiful at the same time, and try and create this sense of place to create the next best sense to being here."

2017 also marks the last Wimbledon tournament before the AELTC takes over responsibility as the lead broadcaster for the event, as it assumes the mantle from the BBC next year.

In order to prepare for this, IBM AI technology is also being used to launch new video features and services for broadcasters and fans.

For the first time, Watson technology is being used to condense down hundreds of hours of match footage into bite-sized highlights packages that can be quickly published and pushed out online.

IBM’s AI system will now automatically bring together footage of key shots by analysing information such as crowd noise levels, social media interest and even facial recognition of the players.

This can then be quickly uploaded to the official The Wimbledon Channel, which frees up the club’s video production team, and allows more matches than ever before to be broadcast. The AELTC is also harnessing the power of social media apps in a big way, with customised content being rolled out on Instagram and Snapchat Stories, and custom emojis and frames also being available to help maximise fan enjoyment.

"We've been on a long digital journey over the past seven years or so...We're very proud of what we've achieved," Desmond added.

"Tennis as a sport is in very good shape, certainly in the men's game, we are lucky to have these iconic players competing at the top...but Wimbledon will still provide a fantastic stage for these players to play on."