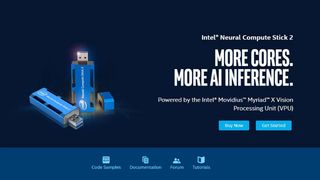 Intel just announced the second iteration of its self-contained AI accelerator, the Neural Compute Stick 2, or NCS 2 which it says should perform better and scale better.

The NCS 2 doesn't require an internet connection, or cloud computing. It's encased in an USB stick, which should make it easier for developers to compile, tweak and optimise neural networks on edge devices (industrial robots, doorbell cameras or cameras in general, to name a few).

The device is powered by Intel's latest generation vision processing unit (VPU), called the Movidius Myriad X VPU. The company is saying this device offers up to eight times improved performance, compared to the first iteration.

It comes with support for the OpenVINO toolkit, allowing devs to build and train AI models in the cloud and deploy them into various products.

It seems as Intel is particularly interested in what this can do for computer vision devices like cameras and doorbells.

"We can do some incredible things with artificial intelligence, and one of the fastest growing data types, as we all know, is video data," Engadget quotes Steen Graham, General Manager of Channels and Ecosystem in Intel's Internet of Things group, saying during a press call on Friday. "The camera is the ultimate sensor."

Anyone can buy the NCS 2 and it is currently available through Intel.