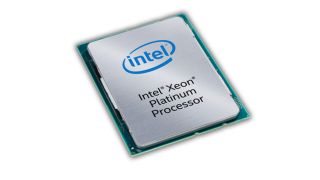 Intel has revealed its most powerful generation of data centre processors yet as it looks to step up to the challenge of a smarter and more connected world.

The new Xeon Scalable processors provide the company’s greatest leap forward in performance in a decade, Intel says, greatly aiding the development of compute-heavy technologies such as AI and 5G networks.

"We've only just begun in terms of seeing the effect technology can have transforming industry after industry,” Navin Shenoy, executive vice president and general manager of the Intel Data Center Group, said at the product’s launch in Intel’s New Lab office in New York today.

"This is our largest gen on gen performance improvement in the past decade...this is a revolutionary change."

Offering up to 28 CPU cores and six terabytes of system memory, the new Xeon Scalable platform provides up to 1.65x performance increase versus the previous generation, making them perfect for heavy-workload industries including HPC, modelling, public cloud, and even genomic research.

Intel has created an all-new Mesh architecture design for the new hardware which it says can offer a “fundamental change” to performance. Compared to the past “ring” design, Mesh architecture provides better connections between the possible 28 CPU cores in the processor, offering more direct data paths - meaning much faster performance.

But some of the most in-demand technology sectors will also be able to benefit from the new hardware, with AI and 5G particularly referenced as Intel unveiled its widest possible ecosystem to date.

When it comes to AI, Intel says the new Xeon hardware ship ready for production, offering out-of-the-box ability to run training and inference systems at the same time. With high-end customers such as Amazon Web Services already on board, the new processors also come with specialised deep learning optimisation that can deliver 2.2x higher deep learning training and inference compared to the previous generation of hardware, allowing for much speedier deployment of AI-powered services.

5G is also set to become a major market for new HPC technology, requiring improvements in terms of server power and performance, and Intel’s new processors are designed to help in this area too.

With 5G expected to provide 1000x capacity improvement and 50x peak data rates, the need for improved agility and performance is paramount, and the Xeon Scalable platform offers the ability to build a network infrastructure that is high-speed, secure and flexible.

“This is more than just faster wireless networks", Shenoy (pictured above) noted, but "a fundamental change that means a new network."

Security is also paramount for the ever-changing technology world, and the new processors are able to deliver a 3.1x performance improvement generation-over-generation in cryptography performance. Applications can also now run with less than one per cent overhead with data-at-rest encryption turned on, providing not just performance upgrades, but improved efficiency as well.

Intel has already begun rolling out the new hardware to customers across the technology industry, with the likes of Google Cloud, AWS and AT&T already reaping the benefits of the 500,000 units shipped out early - the company’s biggest ever pre-launch.