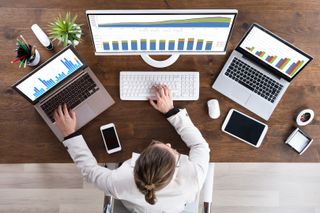 Remote working has been widely celebrated as a means of improving the happiness of the workforce. However, the practice may be having a negative impact on productivity, according to a new report from NetMotion Software.

Based on an analysis of aggregated VPN traffic data, the report states that the vast majority of remote workers (74 percent) have been using corporate devices to stream video entertainment content, mostly from YouTube and Netflix.

This, according to the report, has huge implications for workforce productivity, as well as on the overall cost of bandwidth.

A fifth of workers spend more than ten hours a week streaming this type of content on their work-assigned devices, while almost half (45 percent) spend anywhere between five and 10 hours a week. However, less than a third (29 per cent) admitted doing so during working hours.

Despite the potential drop in productivity, businesses are saving money on the shift to remote working. Almost all content (85 percent) is being streamed over Wi-Fi (up from 49 percent in January), saving employers significant sums in data fees.

In total, businesses are saving $15.44 per employee per month in mobile data charges due to the increased usage of Wi-Fi. Whether these savings balance out profits lost to a productivity dip remains to be seen.