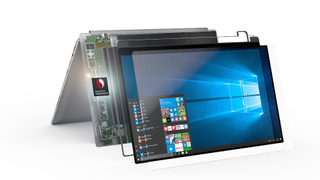 Working on the move may be about to get a lot more powerful after Microsoft unveiled a new generation of Windows 10 on ARM-powered devices.

The Windows giant has announced a new partnership with mobile chipmaker Qualcomm to launch the first PC devices supported by the latter's Snapdragon mobile chips.

Powered by a Snapdragon 835 processor similar to that seen in many of this year's top mobile devices, the new PCs will be able to sport thin, fanless designs, and come with all-day battery life. The new hardware will also be "always-on" and constantly connected to gigabit-speed LTE networks, ensuring speedy downloads and updates.

“Always Connected PCs are instantly on, always connected with a week of battery life,” Myerson said. “Powered by the Snapdragon 835 Mobile PC Platform, these Always PCs have huge benefits for organisations, enabling a new culture of work, better security and lower costs for IT.”

HP, Lenovo and Asus have already signed up to produce devices using the new hardware, with more manufacturers expected to join soon. HP and Asus revealed their devices at the event, with the former unveiling the HP Envy x2, and the latter the Asus NovaGo.

Both companies say that their devices will include Windows 10 S, meaning they will only run apps from the Windows Store, but will offer a free upgrade to Windows 10 Pro for the full desktop experience.