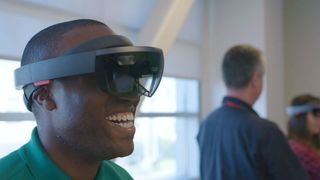 Microsoft has revealed that HoloLens 2, the second iteration of its augmented reality headset display, is now being shipped for users that preordered the device earlier this year.

The headset, which costs $3,500, will be shipped to customers in the UK, US, France, Germany, Ireland, New Zealand and Australia.

Looking at the specs and the possibilities of HoloLens 2, it seems to be a significant step up from the original 2016 HoloLens. It comes with a much wider field of view – Microsoft claims the overall view area “more than doubled”. The Verge, however, claims the view is up to 52 degrees, from the initial 34 degrees on the first device.

But it’s not just the increased field of view that HoloLens 2 has to show, the new device also comes with significant improvements to gesture controls. Unlike the first HoloLens which only offered the air tap, this one allows things like pinch to zoom, or dragging objects around the field of view. Menus can be pulled up by a simple tap on a holographic button on the wrist.

While the original HoloLens debuted with games and art apps, it seems as Microsoft is aiming at business users this time around. People working in manufacturing, and those working out in the open with their hands usually busy, those seem to be Microsoft’s number one target with this device.

There is also an option of Microsoft’s Remote Assist software, the company’s hands-free troubleshooting, but it requires a (yet unknown) monthly fee.