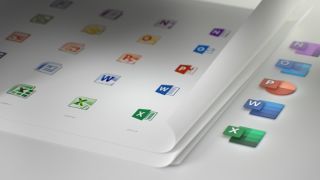 To celebrate significant changes to its Office suite, Microsoft has decided to redesign the now five-year-old icons. Announcing the redesign in a blog post, Microsoft says Office is transforming into a collaborative suite that lets users work together in real-time, from almost any device.

Furthermore, Microsoft emphasises the integration of artificial intelligence, allowing users to get insights from data with less effort, dictate a paper, or build a resume through LinkedIn insights.

The company has also added new apps to the suite, including Microsoft Teams.

But – it’s the icons that are getting all the limelight, and a short YouTube announcement video to go with. Microsoft says the icons feature “carefully crafted designs that honour heritage and welcome the future.”

Besides featuring a different set of colours (icons now feature “bolder, lighter and friendlier” hues), the icons now also visually describe what the app does. So, for example, while Excel’s icon is a rectangle, mimicking the spreadsheet’s cell, the PowerPoint icon is round, just like a pie chart.

“Simplicity and harmony are key visual elements that reflect the seamless connectivity and intuitiveness of Office apps,” Microsoft says. “While each icon has a unique and identifiable symbol, there are connections within each app’s symbol and the collective suite.”

We can also expect different icons for the same app, on different platforms. Microsoft said it wanted to decouple the letter and the symbol in the icons, essentially creating two panels.

“This allows us to maintain familiarity while still emphasizing simplicity inside the app.”

The new icons will roll out ‘in the coming months’, with mobile and web being prioritised.