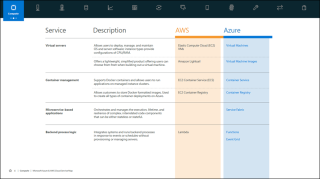 Microsoft has released a new tool to help IT decision makers understand the differences and similarities between Azure and Amazon Web Services easier.

Both Amazon and Microsoft have increased their cloud offerings by a significant margin in the last couple of years. That makes tracking the differences, advantages and disadvantages of the two platforms reserved for only the most cloud-savvy among IT decision makers. That, as it turns out, isn’t good for anyone.

So Microsoft wants to simplify the analytics process, laying out the pros and cons and helping customers plan their cross-cloud environments and movement.

Even though the media see this as Microsoft’s way of stepping up the marketing competition with AWS, they are also pointing out that it is quite common for businesses to use multiple service providers when it comes to cloud.

"Whether you are planning a multi-cloud solution with Azure and AWS, or simply migrating to Azure, you will be able to use this service map to quickly orient yourself with the services required for a successful migration," Microsoft said in a blog post. "You can use the service map side-by-side with other useful resources found in our documentation."